Whincup: Nowhere to hide at Barbagallo

Whincup: Nowhere to hide at Barbagallo 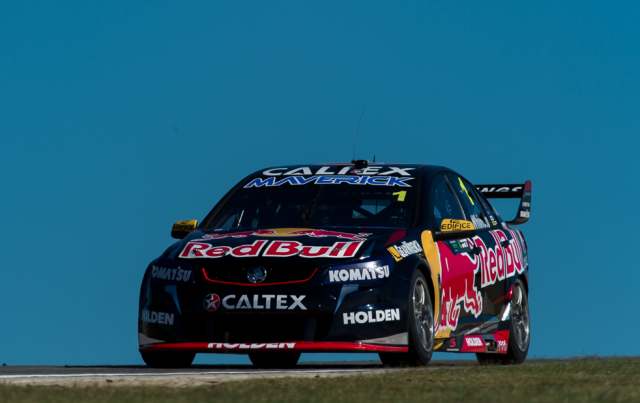 Jamie Whincup during practice at Barbagallo

Jamie Whincup says that he and engineer David Cauchi will need to up their game at Barbagallo in order to repeat recent success.

The six-time champion firmly states that he lucked into victory last time out at Symmons Plains after proving unable to match the pace of team-mate Craig Lowndes.

Whincup ended Friday practice at Barbagallo in 14th place as teams mixed a variety of pre-marked tyres with long and short run plans.

The driver expressed confidence that the team had successfully completed its full practice program and is expected to be on the pace when the new tyres come out for qualifying.

Whincup admits, however, that there is no margin for error in set-ups on Barbagallo’s high degredation surface, which magnifies small imbalances as stints unfold.

“This track really relies on having a good car, without doubt,” Whincup told Speedcafe.com.

“If there is a track that relies more on the car than the driver, it’s here.

“In Tassie we weren’t too far away, but we weren’t quickest and we just got lucky.

“There will be nowhere to hide in these races.”

Now in his second year working alongside Cauchi, Whincup says he is energised by the competition from evergreen Lowndes and new recruit Grant McPherson.

Lowndes, 16th in Friday practice, will be shooting for his 100th career win in today’s two 60km heats.

“Tassie was purely about those guys doing a good job with the set-up,” said Whincup.

“Lowndesy is starting to work really well with Grant and they’re starting to get a bit of momentum on.

“It’s great because it challenges Cauchi and I to keep stepping up and operate at a higher level.

“It’s still very early days for us and we need to keep improving,” he added.

“There are plenty of areas where we need to be better, but we’re working through it.

“We’re getting better by the round but sometimes to take a step back to take two steps forward.”

Although now in the third year of the Car of the Future platform, Whincup stresses that the team has remained aggressive with its development of the package in order to remain on top.

“Overall as a team there are a few little weaknesses to work on,” he said.

“There are a hell of a lot of strengths, which is why we’re leading the championship, but we don’t want any weaknesses.

“We’re working hard to knock them on the head in the next few months.

“When you’re not it opens all sorts of question marks and we keep striving to be the best of everything.

“The reality is that there’s more competition each year and we’ve got to step up our game.

“If we put in our performance from last year we’ll end up sixth or seventh in the championship.

“We’ve got to keep stepping up and that’s what the sport is all about. It keeps you fresh.

“It’s what’s made the victories I’ve had so rewarding.”