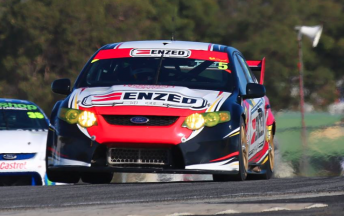 The Prodrive Racing Australia driver dropped to third at the start having been outpaced by polesitter Chris Pither and Jack Le Brocq on the initial run to the first corner.

Waters was lucky not to lose third to Eggleston Motorsport’s Paul Dumbrell after the pair made contact  through the high speed Turn 2 and Turn 3 complex.

However, the Ford man quickly regrouped and began to reel in Le Brocq before unleashing an aggressive pass on the Erebus Motorsport V8 co-driver at Turn 7.

Race leader Pither soon had his mirrors full of Waters having witnessed his 1.4s lead diminish in a matter of laps.

Waters shot to the lead on lap 11 with a slick move on Pither, who was unable to hang on to the Prodrive Falcon.

In the end, Waters stormed to the chequered flag with a healthy advantage over Pither, while Le Brocq filled the final place on the podium in third.

Dumbrell shadowed Le Brocq for the majority of the 28 lap race in fourth ahead of an impressive Aaren Russell.

Young gun Todd Hazelwood came home in sixth in front of Shae Davies, who surged his way to seventh from 14th on the grid.