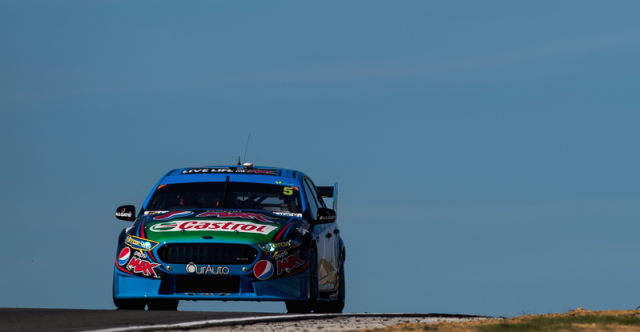 Mark Winterbottom will start on the front-row in both races

Prodrive team-mates Chaz Mostert and Mark Winterbottom have taken an Armor All Pole Award apiece on Saturday at Barbagallo.

Mostert edged Winterbottom to the Race 7 pole in the first of the back-to-back 10 minute sessions, both of which came down to a single run on new hard tyres.

The youngster’s 57.04s best proved 0.06s clear of Winterbottom in an impressive showing from the new Falcons.

The result snapped a 46 race drought for Ford in the V8 Supercars Championship and also marked Mostert’s first career pole exactly two years after his debut.

It was a disaster for championship leader Jamie Whincup, however, who will start just 21st in the afternoon’s opening heat.

The second session saw Winterbottom turn the tables on his team-mate, improving to a 56.9s to score pole for Race 8.

Whincup jumped to second ahead of Fabian Coulthard, Lowndes and Mostert.

It proved tough going for DJR Team Penske in both session as Scott Pye secured just 22nd and 19th on the grid for the respective races.

Volvo is also set for a tough afternoon, failing to make the top 10 in either session on the one-year anniversary of the manufacturer’s first V8 Supercars Championship race win.

The first of two 25 lap races will get underway at 1315 local time.