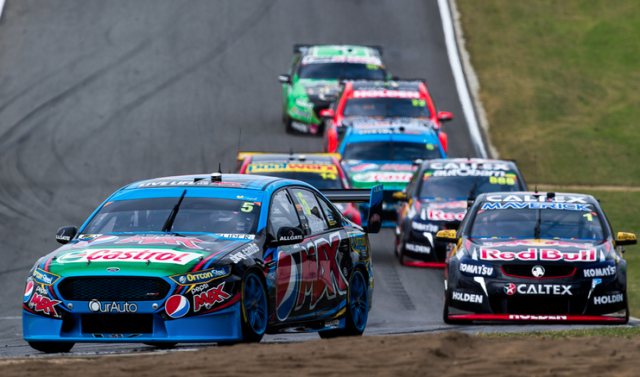 Winterbottom drove away from Whincup to secure the Race 8 win

Jamie Whincup says it was ‘almost embarrassing’ to stand on the Race 8 podium after struggling for speed throughout today’s two 25 lap races at Barbagallo.

Starting second, the Red Bull driver could do nothing about pole-sitter Mark Winterbottom, who sailed into the distance to secure a double victory.

Struggling for grip throughout, Whincup proved able to hold off the advances of Fabian Coulthard, Chaz Mostert and Craig Lowndes in order to finish second.

The performance had followed a difficult opening race that saw Whincup qualify 21st and finish 15th.

“It wasn’t our greatest day at the race track,” Whincup said.

“We pretty much have one good lap to show for our day (in the second qualifying session), the rest was pretty ordinary.

“I was full speedway (sideways) at the end (of the second heat), it was almost embarrassing to stand on the podium at the end of the day because I had absolutely no pace.

“Lowndesy showed some pace in the first one so we’ve got a little bit of info there but we’ve got some work to do,” he added.

“We’ll put our head in the data. We’ve got quite a backlog of information around this place when we have been quick, so we’ll knuckle down and see what we can do.”

Qualifying had been the first opportunity for drivers to sample their cars on new rubber due to the tight tyre allocation.

While Whincup’s lack of speed was a nasty surprise for Red Bull, Winterbottom said his team was equally shocked with their sudden upturn in performance.

Winterbottom qualified second and first for the respective races before leaping from sixth in the championship to first with two race wins.

“It was horrible through all of practice to be honest and we put tyres on in quali and it lit up,” said Winterbottom

“Going into qualifying I was really nervous and worried about the car and where it was at.

“It’s hard to develop the car when you’re running around on 100km old tyres because it doesn’t handle in with your best set-up.

“You’re almost doing a bit in the races and a bit in qualifying, but new tyres just tidied it up and it’s been good since qualifying.”