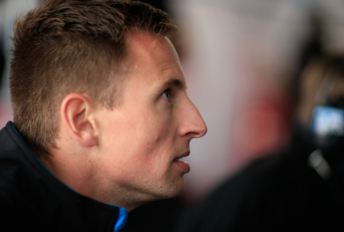 Chris Pither claimed pole position for the first of two Dunlop Series races as the series celebrates its 100th round at Barbagallo Raceway this weekend.

The Ice Break Ford Falcon driver surged to the top of the time sheets in the dying minutes of the session with an impressive 57.2102s effort.

Pither set the pace in practice on Friday despite being forced to sit out the opening session due to an electrical fault on his car.

“I’m over the moon we had a tough start to weekend so hopefully this is the start of a good season,” said Pither.

Andrew Jones was fifth fastest ahead of Super Black Racing’s Simon Evans and Aaren Russell, who topped the first part of qualifying.