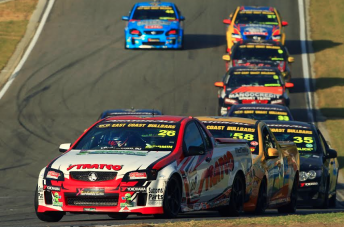 McNally made the most of crash strewn opening lap to emerge in the lead where he would remain for the remainder of the race, despite a spirited challenge from Harris.

The race had barely begun before the Safety Car was deployed.

Contact between Cam Wilson, Kris Walton and Danny Budzadzic resulted in Jeremy Gray being fired off into the Turn 1 gravel trap.

Worse was to follow as Peter Burnitt lost his left rear wheel in an unrelated multiple car incident on the opening lap.

These accidents came after poleman Mason Barbera and George Mideceke made heavy contact at Turn 1, which forced Barbera out of the race with a left rear puncture.

Once racing resumed the attention switched to a tantalising battle for the lead between McNally and Harris.

The pair diced for the remaining laps with Harris trying to force his way through.

Gerard McLeod came through a thrilling four car battle to take third ahead of Adam Marjoram, Miedecke and David Sieders.

Meanwhile, Kim Jane starred in the earlier race of the day as the pole position winner held his nerve under immense pressure to hold off Sieders to the chequered flag.

Having converted his pole position into the race lead, Jane was unable to put away from the field as a quartet of drivers battled for the lead.

Sieders led the pursuit of Jane with Ryan Hansford and local Grant Johnson never more than a second adrift of the leader.

Despite facing a period of continuous pressure, Jane held his nerve to take the win from Sieders and Hansford.

“Darwin last year was my last win but this is the first time in about three years that I’ve gone back to back with a Pole and a Race win, so it’s a great feeling,” said Jane.