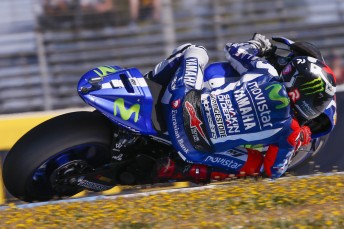 Jorge Lorenzo on his way to Jerez pole

The Yamaha rider proved to be in a class of his own as he posted a 1:37.910s effort to break Marc Marquez’s lap record to claim his first pole position since Misano in September last year.

Lorenzo set the pace from the outset before going on to improve upon his time twice with his final effort eclipsing the lap record.

Despite riding in pain with a broken finger, Honda’s Marquez managed to haul himself onto the front row just 0.333s adrift of Lorenzo in second.

Ducati’s Andrea Iannone showed strong pace at the Spanish circuit to grab the final place on the front row in third.

Tech 3 Yamaha’s Pol Espargaro was fourth fastest ahead of championship leader Valentino Rossi, who was unable to match the pace of his factory Yamaha team-mate.

The works Suzuki of Aleix Espargaro completed the second row in sixth spot just ahead of LCR Honda’s Cal Crutchlow.

Dani Pedrosa’s replacement Hiroshi Ayoama continued to struggle on the Honda in 16th position, while Australia’s Jack Miller will start Sunday’s race from 22nd on the grid.

“We’ve been struggling all weekend with the bike, trying to get rear grip and we’ve not quite managed it yet, but we’re working hard,”said Miller.

“It’s not going to be an easy race, but we’ve shown that we’ve been strong in the latter half of races so we’ll try to make sure we can do that again tomorrow. But it’s a hard track on a MotoGP bike, we’re trying to adapt and we’re not too far away, just over two seconds.

“The race is going to be hot and long so we’ve got to prepare ourselves for that and hopefully we’ll still have some tyre at the end of it.”