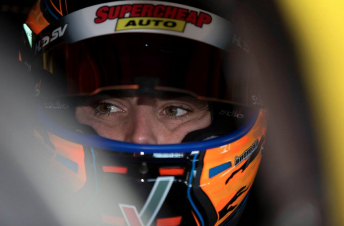 Slade opening lap – a 56.78s on the soft tyres – would not be beaten for the remainder of the 60 minute session.

Teams ran a mix of soft and hard tyres as they continued the task of tuning their cars for both one lap speed and long runs.

Both of Saturday’s races will be run exclusively on the hards, with one set of new softs allocated per car for Sunday afternoon.

“The end results for practice come down to tyres,” affirmed Slade post-session.

“We didn’t get a chance to run on our (pre-marked) softs in Tassie because we had dramas there in practice so we brought them here.

“We got through some good stuff, I think we learnt a bit and obviously the thing is not bad on the soft tyres.

“I’d rather be there than any further down but we’ll see what happens tomorrow.”

The second session was hit by a single red flag; called in the early stages when Scott Pye locked up and sailed into the Turn 7 gravel.

Regular front-runners Jamie Whincup, Craig Lowndes, Chaz Mostert and Shane van Gisbegen all ended up mired down the order amid the mix of tyre type and condition.

“We don’t know if we’re good, bad or otherwise at the moment,” said Whincup.