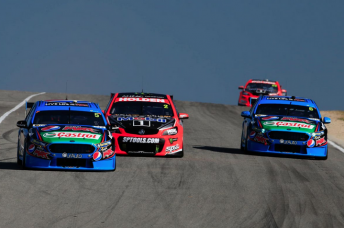 V8 Supercars drivers are preparing for a frustrating weekend of racing at Barbagallo as they juggle a limited tyre allocation on the highly abrasive circuit.

While a mixed bag of pre-marked tyres across the field ensured the practice order meant little, a further deterioration of the track surface since last year proved the day’s main lesson.

The Holden Racing Team’s James Courtney was second fastest behind stable-mate Tim Slade and is among those braced for three arduous races.

Saturday’s two 60km heats will take place on the hard tyre, before a single set of softs is added to the mix for Sunday’s 200km finale.

“We all knew coming in here it was a matter of managing the tyre and I think today highlighted that more than what we predicted,” said Courtney.

“It is very much going to be a tyre conservation race and we’re really going to have to be very careful with the tyres to look after them.

“It’s going to be tight to get through on Sunday and if you get a bit carried away you’re going to be in a whole world of pain later in the race.

“It’s hard for us as drivers to control that and also the teams with strategy.

“We’ll have to monitor track temperature and what the cars are doing around us pretty closely.

“Someone might press on at the start of the race and pull away and you’ll have to exercise a bit of self control to be able to monitor that and drive to the number that the team gives you.”

Although the high degradation can lead to late-race passes as drivers scramble for grip, Courtney stressed that the lack of available rubber discourages hard racing.

“I don’t know if it’s interesting racing because it makes us drive to a number (set lap time),” he said.

“You can’t just rag it and have a lunge because one, you don’t want to flat spot it and two, you’re going to burn the tyre out.

“So you’re just driving to a number and hoping the number you’re driving to is going to be better than the one they have got.

“It just takes the aggression out of the driving and stops people having a good, red hot go.

“You end up with more engineers racing than us racing I suppose.”

Tomorrow will see a final 15 minute practice session before a pair of 10 minute qualifying hit-outs, setting the grid for the afternoon’s races.

“This year we’ve got four sets and last year we had seven sets and the track has gotten worse,” said Winterbottom. “It’s making it hard to manage.

“Tomorrow will be the real test. You bolt new tyres on, go a second quicker and have to relearn your whole car again.

“That first lap (on a new tyre in qualifying) is your lap; it’s hard to switch on and go 20 metres deeper under brakes and 20 metres earlier on the throttle when you’re guessing (what the grip level is).

“I’m sure session one will be a big variance and then in session two it will get really tight. We’ll see how we go.”