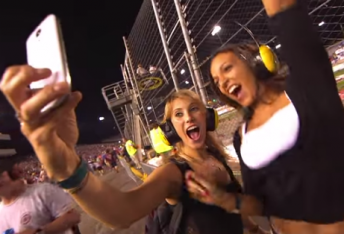 NASCAR is calling on Aussies to engage in their 100,000 Cameras Project during the Talladega Sprint Cup race in the early hours of Monday morning

NASCAR has put out a call to Australian fans to post selfie videos and pictures during the live broadcast of the GEICO 500 Sprint Cup race at Talladega in the early hours of Monday morning.

Videos posted on social media, recording how fans watched the Talladega race will be in the running to be selected in a post-event NASCAR show on Fox Sports on May 14.

NASCAR was hoping for Marcos Ambrose to participate in the concept however he will be tucked up in bed in Perth when the Talladega race is on.

Ambrose, Australia’s only full-time NASCAR driver before returning to V8 Supercars this season after nine years Stateside, is in Western Australia ahead of engaging in a ride day for the DJR Team Penske squad at Barbagallo on Monday.

The broadcast is from 3am (AEST) or 1am in West Australia.

A similar project proved an overwhelming hit during the running of the Coca-Cola 600 at Charlotte last year.

Uploading videos and or pictures to any of your social media platforms should be accompanied with the #100KCams and #NASCAR.

To learn how you can be involved in the 100,000 Cameras Project see the video below.