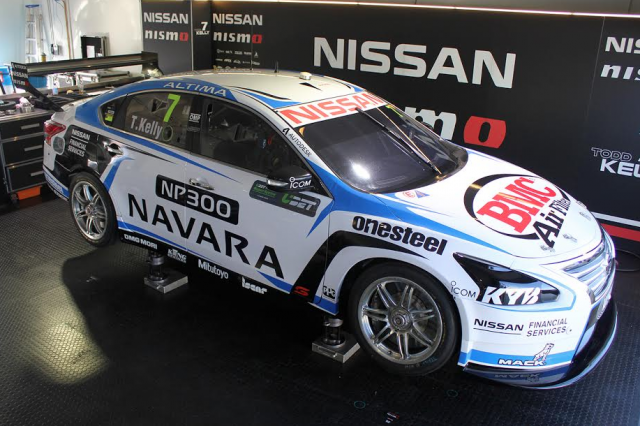 Nissan will have major branding on three of its four Altimas this weekend, with Todd Kelly’s entry promoting the company’s Navara model.

Kelly’s car is decked out with Navara on its doors and BMC Air Filters on its bonnet for this weekend as it remains without a primary sponsor for the season.

Nissan has this year expanded its presence with Michael Caruso’s entry running a factory Nismo Nissan livery at all events.

James Moffat’s car meanwhile has a Nissan Nismo bonnet from this weekend, along with new support from Toshiba.

“Nissan has been highly proactive in the promotion of the upcoming release of the all-new NP300 Nissan Navara,” said the team’s commercial director Nick Ryan.

“V8 Supercars is seen as a key platform to support the launch of this new vehicle and we are pleased to play a significant role in this promotion with the Navara branding.

“BMC Air Filters is a leading brand in the industry and have featured in our V8 Supercars since the inception of the team.

“We are pleased to support their continued growth in the market place by showcasing the brand not just underneath bonnet but now also on top.”