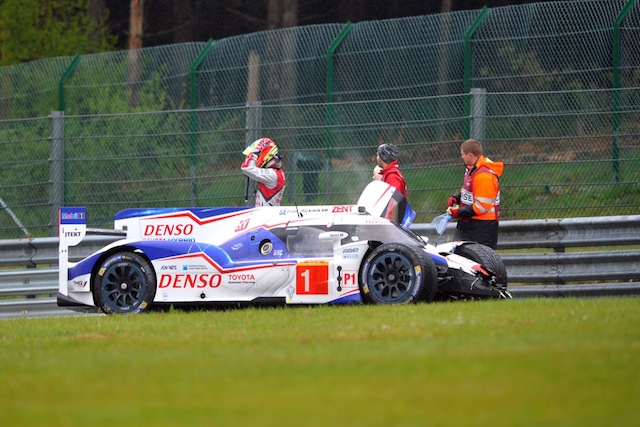 Audi driver Oliver Jarvis stands beside the Toyota of Kazuki Nakajima after the Japanese driver ploughed into the back of the R18 e-tron quattro. pics: PSP Images

Kazuki Nakajima has suffered a fractured vertebra after slamming into the back of the Audi R18 driven by Oliver Jarvis in practice for the second round of the World Endurance Championship at Spa-Francorchamps.

Toyota has elected not to replace Nakajima in the #1 TS040 Hybrid he was to share with world champions Anthony Davidson and Sebastien Buemi.

Nakajima was transported to a hospital in Verviers after complaining of severe back pain following the shunt while Jarvis escaped injury.

The accident happened on a wet track on the entry into Les Combes.

The damaged #1 will be rebuilt around a new monocoque and be ready in time for final practice ahead of qualifying for the 6 Hour race at the Belgian circuit.

“There’s not much I can say about the accident,” Nakajima said.

“I was on the straight and suddenly through the spray there was a car right in front of me. I had no time to react.”

Audi meanwhile said repairs to the #8 machine will involve the gearbox, suspension and the rear structure.

With the showpiece Le Mans 24 Hours just over a month away, Toyota Gazoo Racing team president Toshio Sato said that it is unknown how long Nakajima may be out of action.

“The team will support him (Nakajima) in these next days as he recovers in hospital before returning to Japan at the first opportunity,” Sato said.

“It is too early to speak about the future; we will fully analyse the situation and the possibilities before making a decision.

“Right now our priority is to make sure Kazuki is okay.

“Looking at the video of the accident it is clear he had no chance; the visibility was very poor due to the spray and there was nothing Kazuki could do.”

The #1 Toyota had set the second fastest time in Practice 1 after its Practice 2 crash.

Practice 2 was topped by the #19 Porsche 919 of Nico Hulkenberg, Earl Bamber and Nick Tandy with the #17 Porsche of Timo Bernhard, Mark Webber and Brendon Hartley second fastest in the wet conditions. 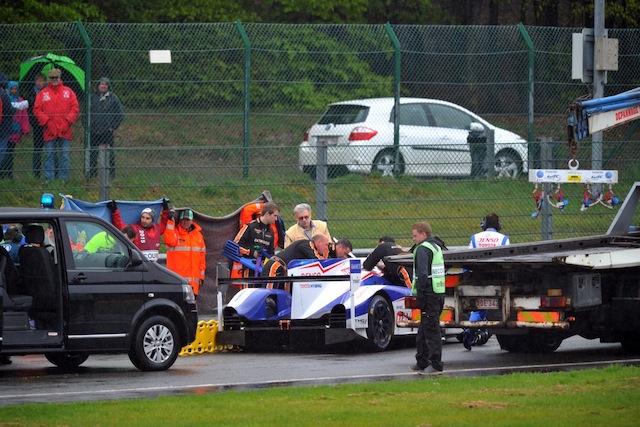 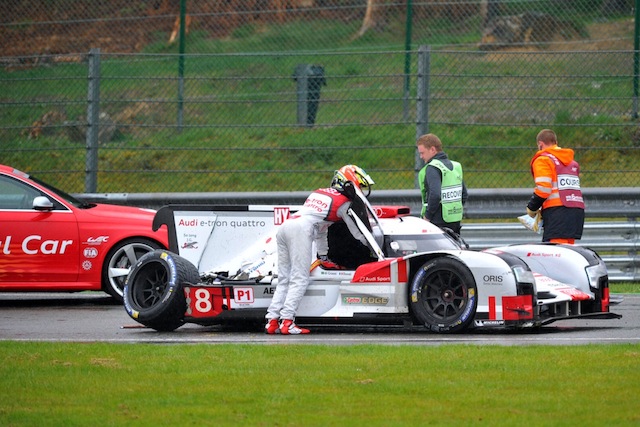