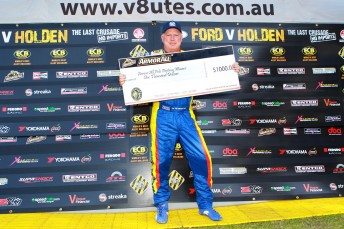 Erebus Motorsport’s Kim Jane has claimed pole position for the V8 Utes Barbagallo Raceway opener despite receiving a reprimand for a pitlane infringement.

Jane topped Friday’s Top 10 Shootout at the Perth circuit with an impressive 1:06.65s effort, but his pole position was put in doubt for a breach of the pitlane regulations.

The Holden driver returned to his pit bay instead of going directly to Parc Ferme following the completion of qualifying.

A stewards inquiry was launched resulting in Jane retaining his pole position despite being issued with a reprimand for his actions.

“It’s great to get pole, it’s our first one in 75 races and we all know how competitive this series is,” said Jane.

“I’m not getting any younger so to get one is great, I was driving down pit lane yelling and celebrating and I was getting ready to get out of the car and give everyone a big hug.

“I pulled into pit lane and it was a breach, we went to the stewards and pleaded our case, and we got let off so we’ve still got pole.”

Ryan Hansford emerged as the best of the Fords in third with Grant Johnson, who topped the first part of qualifying, in fourth just 0.4s adrift of the poleman.

However, it proved to be a difficult session for the championship pacesetters Ryal Harris and Kris Walton as the pair both failed to secure a place in the Top 10 Shootout.

Harris will start Saturday’s Round 2 opener from 11th with Walton a lowly 17th on the grid.