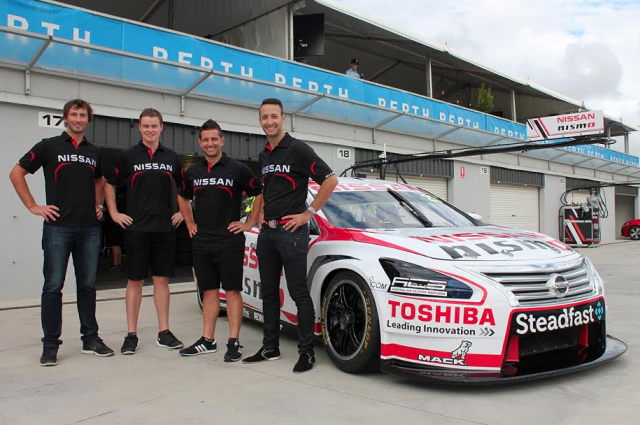 Douglas and Fiore have joined their enduro partners at Barbagallo

Nissan Motorsport’s Taz Douglas and Dean Fiore are among a handful of co-drivers set to join the full-timers in today’s V8 Supercars practice sessions at Barbagallo.

The duo, which also took to the wheel of the Altimas at Sydney’s February SuperTest, have today been confirmed to return to the Pirtek Enduro Cup alongside James Moffat and Michael Caruso respectively.

The duo were easy call-ups for the Barbagallo practice sessions, with Fiore a Perth local and Douglas already competing in the Dunlop Series support races.

It is Le Brocq’s first time behind the wheel of Ash Walsh’s Mercedes following the announcement of his deal last week, although the 22-year-old has enjoyed previous private tests miles in E63s.

Walkinshaw Racing has flown Warren Luff, Jack Perkins and Tony D’Alberto across to steer their respective endurance mounts, adding to the laps new recruit Perkins enjoyed at the SuperTest.

Although co-driver track time is highly sought after, the value of today’s running will – as usual – be somewhat reduced by a lack of quality pre-marked tyres for most teams.

Each of the co-drivers are, however, granted a set of used rubber in addition to the three pre-marked sets allocated to the primary driver.

Front-runners Red Bull and Prodrive have notably elected to stick with their main drivers for all sessions, despite Paul Dumbrell, Cameron Waters and Ant Pedersen being at Barbagallo on Dunlop duties.

As previously reported, DJR Team Penske has also elected to focus on its primary driver Scott Pye, leaving Marcos Ambrose on the sidelines until a ride day on Monday.

Fiore and Douglas are meanwhile eager to get behind the wheel today after making their continuation at Nissan official.

“I’m pretty excited to be driving the car on Friday at most events leading up to the enduros and making sure we’re nice and sharp come Sandown,” said Fiore.

David Russell is also locked into Nissan Motorsport’s enduro line-up, slated to share with Rick Kelly, but is not at Barbagallo this weekend.

The team continues to await confirmation from Nissan’s international motorsport chiefs on their co-driver plans for Todd Kelly, who last year paired with the company’s factory GT driver Alex Buncombe.

CLICK HERE for Speedcafe.com’s overview of the Pirtek Enduro Cup line-up from earlier this week.