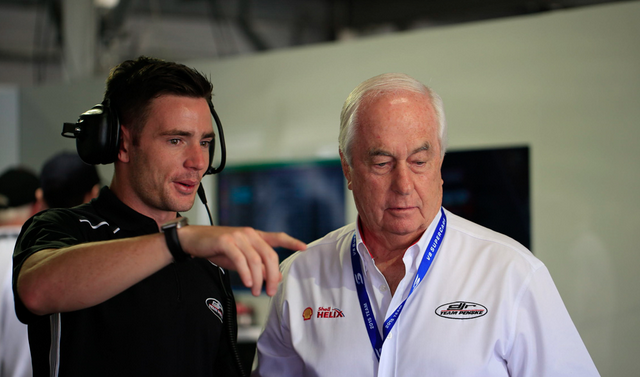 Scott Pye with Roger Penske at the Clipsal 500

Scott Pye insists he won’t be feeling any added pressure when he races in front of American business giant Roger Penske for the first time this weekend.

The DJR Team Penske majority owner will jet into Perth with offsider Tim Cindric on Friday before returning to the United States at the conclusion of the meeting.

Barbagallo will mark Penske’s second appearance at a V8 Supercars event this season and his first time with the team since Marcos Ambrose’s shock decision to step down from driving last month.

Pye had, in his own words, been “effectively fired” by the team late last year when Penske elected to scale DJR back to a single car for Ambrose.

Despite the setback, the 25-year-old South Australian built a solid bond with Penske at the Clipsal 500, where they stood side-by-side in the garage during track sessions.

Unknowingly positioning himself perfectly to pick-up the pieces after the Ambrose bombshell, Pye stepped into the drive at Symmons Plains and continues in the seat this weekend.

While Penske cuts an imposing figure in any garage he enters, Pye says he’s looking forward to performing under the gaze of the 15-time Indianapolis 500 winning owner.

“It does put some extra pressure on the team to perform, but I’ve spoken to Marcos about it and for me, I don’t think it’s any more pressure,” Pye told Speedcafe.com of Penske’s presence.

“I put pressure on myself every weekend and no matter if he’s here or not, he’s going to be on the phone asking what’s going on.

“After the positive test that we had I hope we can put on a good show, make him smile and punch the air like he did at Clipsal (when Ambrose made the Shootout).

“Really it’s just a great opportunity for me to drive in front of Roger and Tim. I was so excited to meet Roger at Clipsal and, he might say otherwise, but I thought we got along really well.”

Despite an encouraging test at Queensland Raceway last week, Pye and the team have downplayed expectations for a sudden leap in performance at Barbagallo.

CLICK HERE for more from Pye following the test day.

Pye instead says that the main target is for the team “to be a real contender come enduro time”, when he’ll team with Ambrose for the three-event Pirtek Enduro Cup.

A decision not to give Ambrose any laps at the recent Ipswich test was perhaps the strongest sign yet that the team has now rallied firmly around Pye in its quest for improvement.

Not surprisingly, the youngster is revelling in the support from the team, which he notes is a significantly different environment to what it was last year.

“To have Roger Penske ring you and say ‘anything you need, just let us know and we’ll get it for you and help you’… for me it’s massive,” he said of the team’s support.

“I was effectively fired at the end of last year and to get the enduro drive was good, but being promoted to lead driver is such a massive pat on the back for me.

“It obviously shows that people were watching what we did last year in such a small team.

“Last year we probably had the smallest budget in pitlane, which was tough. But now the morale, everything is boosted and everyone seems a lot happier.

“I probably am the freshest one here in the team and I don’t have the (overall racing) experience that Marcos has got.

“My target is for us be a real contender come enduro time and I think for both of us this might be the best way to do it.

“Now that we have the resources hopefully we can get the results that everyone deserves.

Pye’s car will run in MTU colours this weekend; the first time the #17 Ford has carried one of Penske’s own brands.