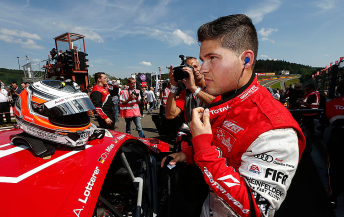 German GT ace Christopher Mies is looking forward to competing against V8 Supercars drivers in equal machinery when he joins the Porsche Carrera Cup Australia Pro-Am at Phillip Island from May 22-24.

Mies will link with Marc Cini in the shared driver event that will see a mix of Carrera Cup regulars and a smattering of V8 Supercars drivers.

Nick Percat is scheduled to share with Shane Smollen while Scott McLaughlin and Tim Slade are also expected to return after running at last year’s event with Steven Grove and Adrian Mastronardo respectively.

Other guest Pro drivers confirmed for the event include Dean Canto, who will co-drive with Scott Taylor, and Dean Fiore, who will share with Ash Samadi.

A double Bathurst 12 Hour winner, Mies is in peak form after combining with Nico Mueller to supply Audi with the first victory for its new R8 LMS at the VLN race at the Nurburgring last weekend.

“I’ve enjoyed racing with Marc many times but never in Carrera Cup so I’m looking forward to returning to Australia for this unique opportunity,” Mies said.

“The event has some great local talent – both Carrera Cup drivers and local V8 racers.

“I’ve raced many of them before in the Bathurst 12 Hour.

“Now I’m looking forward to competing against them in the same spec race car.”

Mies shared an Audi R8 LMS with Cini and Mark Eddy at the Bathurst 12 Hour earlier this year, finishing third in their class and 10th outright.

The German will be on double duties at Phillip Island as he continues his Australian GT Championship campaign alongside Greg Crick.

The JAMEC-PEM Audi drivers sit equal sixth in the standings follow the opening round on the streets of Adelaide last month.