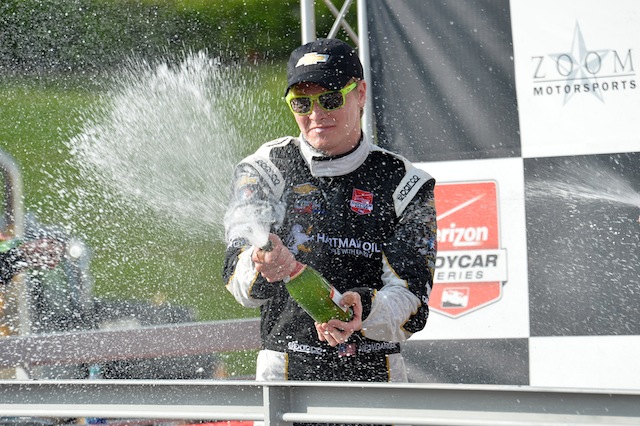 Josef Newgarden executed the drive of his career by slicing to his maiden IndyCar Series win at the Honda Grand Prix of Alabama.

Newgarden prevailed in the 90-lap affair which saw some established stars slip up as the series served up its fourth different winner in the opening four rounds of the season.

The 24-year-old Carpenter/Fisher/Hartman driver scored a decisive victory over a charging Graham Rahal, who managed a last lap pass to relegate Ganassi’s Scott Dixon to third.

Will Power produced a stunning drive to climb back after falling back through the field following a penalty to finish fourth.

Series front-runner Juan Montoya was on the back foot after his lowly qualifying and finished 14th one place ahead of team-mate and pole sitter Helio Castroneves who ran out of fuel.

Newgarden, the 2011 Indy Lights champion, had earlier pulled a slick overtaking move on Castroneves before tempering his nerves to complete a solid first victory.

“Oh man I’m so nervous. I can’t tell you how nervous I was. I’m normally not in racing but it’s been such a long time coming doing this,” Newgarden said.

“I knew one of these days it was going to happen with this team.

“It’s so hard to become a professional driver nowadays and they (team owners) made me one.

“The Chevrolet was incredible. I could get incredible fuel mileage with fast pace. The Chevys are unbelievable cars and are spanking the Hondas right now.”

The points standings sees a status quo situation at the top with Montoya maintaining a slender three-point buffer over Castroneves with Dixon third while Newgarden has rocketed into fourth.

See below for full results:

See below video showing the Will Power/Takuma Sato incident