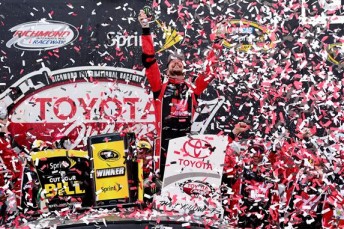 Kurt Busch has scored his first win of the NASCAR season with a dominant performance at Richmond.

The result locks him into the Chase for the Sprint Cup, something that looked unlikely after he was suspended at the start of the year over a court order in a domestic violence dispute.

Busch led a total of 291 of the 400 laps; the most he has ever done in a single race. It was his 26th career win and second at Richmond.

In a show of strength for the Stewart-Haas Racing, defending series champion and current points leader Kevin Harvick finished second in the Toyota Owners 400.

“We’ve just been building and building toward this. When you’re accused of something, and things go sideways, your personal life doesn’t have to affect your business life.”

In a relatively clean race, the major incident involved two of the big names with Tony Stewart and Dale Earnhardt Jr. colliding on the front straight with 40 laps to run. Stewart spun and brushed the inside wall of pit road. He was then unable to get the No. 14 car restarted and finished 41st.