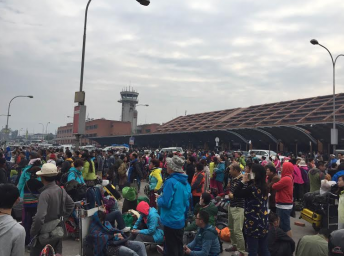 Papadopoulos had been one of six Australians at the FIA Asia-Pacific Sport Regional Congress in Kathmandu, attended by a total of 45 delegates from 14 countries.

The magnitude 7.8 quake hit around around midday on Saturday while Australians Michael Masi and Samantha Reid were giving a presentation to locals on organising motorsport events.

While all at the FIA conference, held at the Everest Hotel, escaped unscathed, the official death toll across the region currently stands at more than 3,000.

“We lost lights, the chandelier started to shake and the floor literally moved from under our feet,” Papadopoulos, who had been observing the presentation, told Speedcafe.com after arriving back in Australia.

“Everything started falling off the walls and the windows broke. I think Michael was the first to call out ‘earthquake’ and we all tried to make it to the door.

“It was very hard when you’ve got a floor underneath you that is there one step and not there the next.

“We kept on falling over, picking ourselves up and trying to get out of the room because we didn’t know what else was going to hit us.

“It was a frightening experience. We were trying to help everyone around us and thank God we were able to get everyone out. 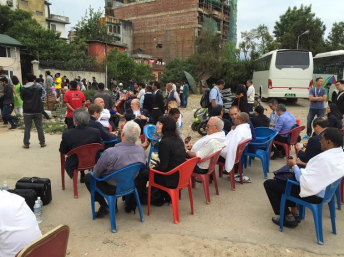 A scene from outside the hotel following the evacuation

“Then we were faced with a wall of water coming out of the swimming pool because it was being thrown around. It was just incredible.

“Doing that while we had windows breaking out of the rooms on top of us was a fairly scary experience.

“There was a lot of screaming and crying. You see this stuff in movies and you say, ‘what a load of crap, none of that would happen’.

“But it does, I can assure you. So many things go through your mind, making sure your colleagues are safe and wondering what’s going to come down next.

“The last thing you expect is an earthquake. It was unbelievable, very surreal.”

Fellow CAMS members Michael Smith and John Murphy were also at the presentation, while CAMS events co-ordinator Marie Dinsdale was in her room in the hotel and made her own way out of the building.

After the quake subsided and all party members were accounted for, the contingent waited in the open area before returning to the building to collect their possessions.

“The rooms were flooded, there were walls down,” he said. “It was an incredible sight that had to be seen to be believed.”

FIA president Jean Todt, who had been elsewhere meeting government dignitaries when the quake hit, gave the party some “heartening words” while it waited beside the hotel.

While some elected to stay the night in tents, the CAMS contingent soon headed for the airport for a hastily arranged evening flight. 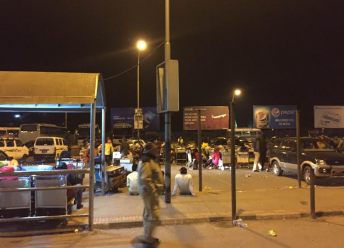 That was subsequently cancelled, leaving the group to experience further aftershocks from within the airport before flying out Sunday evening.

“In the minutes before we left there was a 6.9 aftershock, which elsewhere is a major earthquake,” said Papadopoulos.

“We went onto the tarmac just to get out of building. Michael (Smith) and John (Murphy) were already on another plane (on the tarmac) and said they felt it moving beneath them.

“It was an experience we’ll never forget and unfortunately there was a lot of death and misery left behind.

“Just on the way to the airport we saw cars everywhere, rolled over, and people all in the street not wanting to be indoors when the aftershocks came through.

“There were a lot of people crying, not knowing what would come next.”

Papadopoulos and Masi were both highly complimentary of the efforts from Nepal Automobile Sport Association (NASA, the recently formed local CAMS equivalent) staff.

“They made sure we had food and water to get through. We sat in the airport for almost 24 hours and there were quite a few aftershocks.

“It wasn’t the most amazing night’s sleep I’ve ever had but we were very thankful that we had been given a room to be based out of and we were all in there together.”