Paddon crashes into spectators in Argentina

Paddon crashes into spectators in Argentina 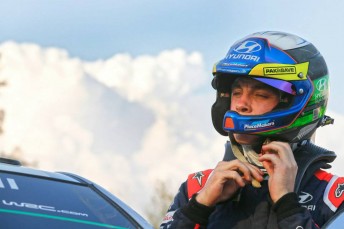 Kiwi rally ace Hayden Paddon has been involved in an accident that has injured six spectators at Rally Argentina.

Injuries include a broken jaw, pelvis and leg fractures, with the most serious being a person observed in intensive care. One has required surgery for a leg fracture, while another person has already been released from hospital with minor lower limb injuries.

The crash occurred on Stage 9 during the second leg in an area which had thousands of rally fans.

Paddon got crossed-up over a jump and his Hyundai i20 left the road with spectators close by.

The stage was stopped and then cancelled, as ambulances attended the scene.

The condition of the injured people is as follows:

Hayden Paddon and co-driver John Kennard were not hurt in the incident.

“I made a small mistake with after a jump – we went slightly off line onto the edge of the road,” said Paddon.

“Unfortunately, there were some spectators which we hit. It was not a nice incident and not the best way to end the day.

“Obviously there’s a lot of spectators here at Argentina and at times they can be quite close to the road. Unfortunately this time we hit them – it wasn’t a nice incident as I say but our best wishes go out to everyone who was involved in the incident.”

Hyundai Team Principal Michel Nandan said that his team will work with all involved to investigate what happened.

“Naturally, our first thoughts go to the spectators who were injured after the #20 Hyundai i20 WRC left the road in SS9,”said Nandan.

“Thankfully, they have been treated very quickly by the authorities on site. We are in contact with the FIA and rally organisers to determine precisely what happened.”

VIDEO: Amateur vision of the accident