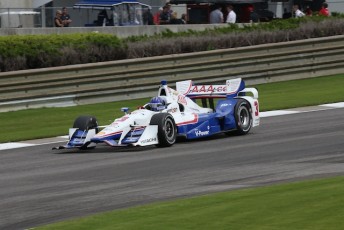 Brazilian ace Helio Castroneves has led a Penske procession to claim pole position in qualifying for the Honda Grand Prix of Alabama.

Castroneves secured the #1 starting berth with a 1:07.1925s tour of the 17-turn Barber Motorsports Park with defending series champion and team-mate Will Power in second.

Power, a winner at the circuit in 2011 and 2012, fell just .19s short while Penske’s Simon Pagenaud will start from third ahead of last week’s Long Beach winner Scott Dixon.

Completing the Fast 6 is Carpenter/Fisher/Hartman Racing’s Josef Newgarden ahead of Ganassi’s Tony Kanaan.

The big shock was the elimination in Group 1 of Penske’s series points leader Juan Montoya who will start from 15th.

Officials scrambled to squeeze in qualifying with weather deteriorating in the area.

The 10-minute final component of qualifying was subsequently stopped with just over 90s remaining as lightning strikes near the circuit.

Andretti Autosport driver Ryan Hunter-Reay will start from 18th in his quest to win a third consecutive Barber IndyCar race.

Castroneves claimed the maiden IndyCar race at Barber in 2010.