Bowe to Johnson: Lunch is on me, mate

Bowe to Johnson: Lunch is on me, mate 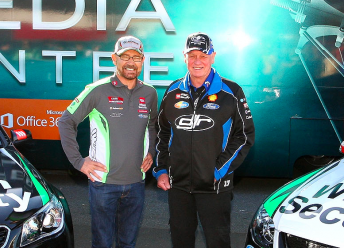 Bowe and Johnson formed one of the most potent two-car operations in the history of the Australian Touring Car Championship from 1988 to 1998.

A double Australian Driver’s Champion in 1984 and 1985, Bowe took time out to honour Johnson’s milestone today.

During his highly decorated career, the Tasmanian’s most important achievements coincided with his stint at DJR – the 1989 and 1994 Bathurst 1000s and the 1995 ATCC.

Bowe, who finished his ATCC/V8 Supercars career with a tally of 31 wins, one clear of Johnson, paid tribute to his former employer as he reached a landmark birthday.

“Knowing Dick as I do, he will be annoyed that people are making a fuss about it,” Bowe told Speedcafe.com.

“And that reflects in we are all still friends. He’s a fantastic driver and a great employer of people and team owner to his own detriment at times.

“With the unfortunate passing of Peter Brock in 2006, I think Dick and Allan Moffat are the last two icons standing from a special era.

“I’d like to wish him happy birthday and I know he’ll have the shits in saying so.

“I’ve told him after the Queensland Raceway round of the V8s I’m going to buy him lunch, which he knows is pretty unusual.”