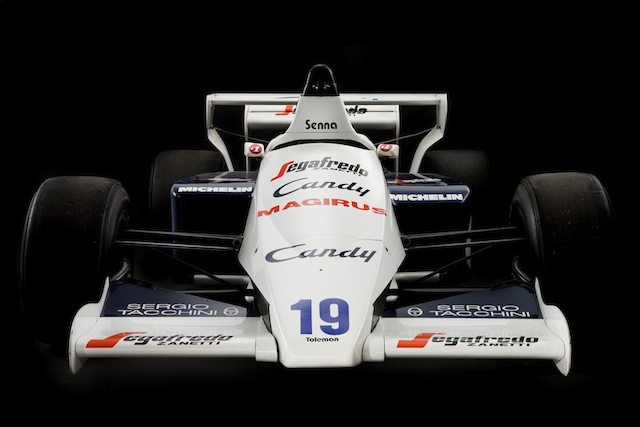 The Toleman-Hart which almost supplied the late Ayrton Senna with his first grand prix victory during a sodden Monaco Grand Prix in 1984 has gone on the market.

The Brazilian led Alain Prost on lap 32 when the race was stopped however the final placings were reverted to the previous lap which meant victory was ripped from Senna’s grasp, leaving Prost as the winner.

Despite the controversial end to the Monaco race, Senna’s second place after charging from 13th on grid signalled the arrival of an epic talent in his rookie season.

“I don’t believe in the paranormal but sometimes when I’m working in our London showroom late at night I feel a presence, a change in the atmospherics of the room,” Prindiville said.

“This only started happening after we took delivery of the ex-Ayrton Senna Toleman-Hart F1 car that we’re selling on behalf of its owners.

“It’s not a spooky feeling, but I definitely get the sensation that I’m not alone.

“Then again, perhaps the goosebumps are simply because I know what a fantastic history this car has, and its ultimate association with one of motorsport’s great heroes and great tragedies.’

The iconic car is available to be viewed by appointment at Prindiville’s London showroom.

The Toleman has previously been owned ex-F1 star Stefan Johansson who raced it during 1984 he was briefly Senna’s team-mate.

The Toleman retains the livery from Senna’s epic Monaco drive, and comes complete with a thick history file and a full set of studio photographs.

Before use by a new owner the Toleman-Hart will require re-commissioning, with this work included within the purchase price of the car.