Marcos Ambrose says he would love to have taken part in DJR Team Penske’s test on Thursday, but understands the team’s decision to concentrate on replacement driver Scott Pye.

The team had initially slated a late run for Ambrose, but a desire to continue with Pye’s program ensured the 38-year-old turned no laps.

Having shocked the team with his decision to stand down from full-time driving after Albert Park, Ambrose says he accepts the need to now fully focus on Pye.

CLICK HERE for more from Scott Pye on the day’s test.

“I put my hand up to drive if they wanted me to, but Scott’s going to drive the car in Perth and they wanted to give him the best shot at running well there,” Ambrose told Speedcafe.com.

“I would love to have had a drive and seen what the car feels like right now, but I’m good with it (the decision to leave Pye in).

“I voluntarily stepped aside to help the team move forward and with one test day and a lot of stuff to run through, you don’t want to be doing driver changes.

“You’ve just got to make the most of the day and that’s what we did.”

“Scott Pye right now is our primary driver so until such time as we get to the bottom of where we’re at from a performance point of view we’re not going to change drivers for the sake of it,” he told Speedcafe.com.

“We’re not going to have Marcos Ambrose in one week and Scott Pye in the next.

“We want to make sure that we’ve got the whole package overall in a better state before we determine when Marcos goes back in as the primary driver.

“When that occurs we don’t know, but this is part of that process.”

A committed Ambrose spent all day at the Ipswich venue and will also head to the upcoming Perth Super Sprint with the team.

There will however again be no driving for Ambrose during the Friday practice sessions at Barbagallo, which permit running for co-drivers.

A ride day on the Monday, where the squad is set to run two cars, will instead be the extent of his track activity.

“Practice is pretty tight there and we’ve got a lot of people (corporate guests for Penske sponsors MTU) coming to the track so we’ve got to give Scott every chance to run the best he can,” explained Ambrose of missing practice.

“I’ll just be doing the same thing as at Symmons Plains, watching, learning, looking and trying to contribute where I can.

“I’ll also be doing some appearances for the team during the week in the lead-up to the event and the Monday ride day.”

Unable to offer any clarity on when he will return to the role of primary driver, Ambrose continues to ask for patience from his fans.

While continuing to be a public face of the team at events amid his stalled comeback could be seen as an awkward situation, he says he was pleased by the reception he received at Symmons Plains.

“The fan reaction was really good, everyone appreciated my position as well as could be hoped,” he said of the Tasmanian meeting, his first since stepping out of the car.

“Obviously it was my home race and there were some disappointed fans, but they understood the reasons why and I think now, post-event, it’s been pretty self explanatory.

“As a team we’ve got some work to do and I think the choices that we’ve made have been good ones.” 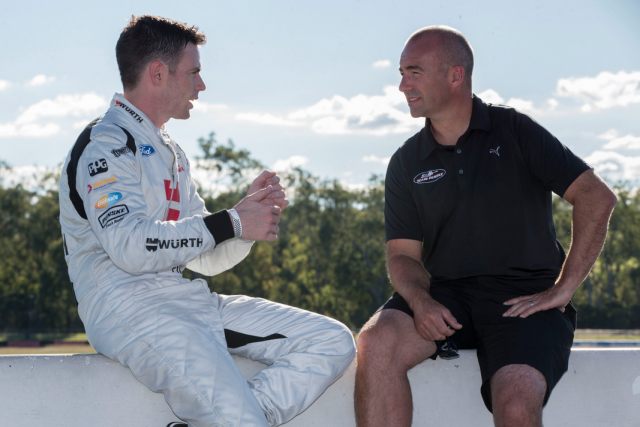 Pye and Ambrose at Queensland Raceway