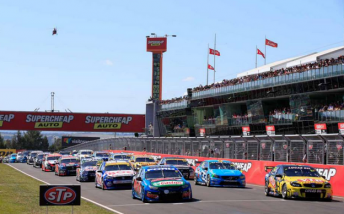 V8 Supercars will give Dunlop Series teams automatic entry to the Bathurst 1000 if they buy a New Generation chassis.

Dunlop Series teams previously had to apply for a wildcard, which could be granted at the discretion of V8 Supercars.

Rookie outfit Dragon Motor Racing was the only second-tier team to apply last year, doing so with the support of Garry Rogers Motorsport.

It was granted three wildcards – one for Sandown and two for Bathurst – but eventually failed to take part in either race.

The very minor tweak to the process comes as V8 Supercars attempts to help its teams move New Generation cars into the Dunlop Series next year.

None of the second-tier teams have currently committed to upgrading as they weigh up the costs.

“There is a two-year phase in for the new generation cars – so it is not compulsory to upgrade for next season,” read a V8 Supercars statement on the Dunlop Series changeover.

“But if teams get in early and purchase a new gen car soon, they will be granted permission to run as a wild card at the Supercheap Auto Bathurst 1000 this October.”

The Kumho Series is run independently of V8 Supercars on the Shannons Nationals schedule.