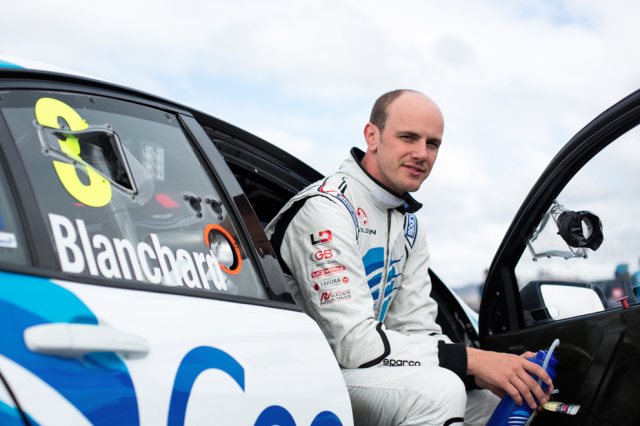 Tim Blanchard fears he may have to sit out the bulk of practice at the next two V8 Supercars events as the lack of a previous tyre bank continues to hurt his new-for-2015 entry.

The Racing Entitlements Contract Blanchard is competing under lay dormant last year before a lengthy legal wrangle resulted in it being returned to Lucas Dumbrell Motorsport for the new season.

Every other REC entered the year with a bank of 80 pre-marked slick tyres left over from last season, which are used for practice before new tyres are run in qualifying and the races.

The new tyres used at each event can then be added to the pre-marked allotment for practice at subsequent meetings.

Under its status as a new entry, Blanchard’s car started the year without a pre-marked tyre bank and has instead had to borrow practice rubber from team-mate Nick Percat, whose REC was campaigned in 2014 by Russell Ingall.

Compounding the issue is this year’s thin tyre allocation. With just four sets allocated per car for each Super Sprint meeting, building up a tyre bank from scratch is proving to be a slow process.

Additionally, tyres left over from Albert Park have not been permitted for use at subsequent events in a move that was designed to stop teams ‘banking’ rubber throughout the non-championship meeting.

Ahead of the upcoming Perth Super Sprint, Blanchard told Speedcafe.com that the tyre situation continues to be a “massive issue” for both he and Percat.

“Personally I don’t understand why when you bring another car into the series and add to the grid you’d be handicapped,” he said.

“If you look at any other sport, like the Gold Coast Suns in the AFL, new teams get a big hand to get off the ground and get going (through draft and salary cap dispensations).

“Here we handicap the new guy. I think it’s not right and it’s made things extremely difficult for us.

“It’s been very frustrating and because we get so few tyres at race meetings now we’re struggling to even get our own bank built up.

“We had to limit our running during the Sydney test and we’ll probably have to spend a lot of practice time in the garage at Perth and Winton because we’ve just got no tyres. It’s ridiculous.”

Blanchard sits 19th in the standings following the first two championship events with a best finish of 17th.

The former Australian Formula Ford champion is confident that there’s still plenty of potential left in the car and team, which continues its rebuild under ex-Erebus recruit Barry Hay.

Blanchard has meanwhile set about improving his own driving skills during the five-week break between events, visiting Tim Sugden’s renowned racing school in the United Kingdom.

This year marks the 27-year-old’s second full season in V8 Supercars, having floated between full-time and endurance roles in recent years.

“We’re obviously going through a development process at LDM but I need to make sure that my end of the deal is up to scratch,” he said of his own form.

“By the end of the year I need to be matching Nick on a regular basis. If that’s not happening then I’m part of the equation of where we are.”

Blanchard will continue in LDM’s ex-Ingall chassis in Perth before an eventual switch to the car recently crashed by Nick Percat at Albert Park.

That chassis, which is fresher than Blanchard’s current car having sat out last year, is now back at the team’s workshop after undergoing repairs at Pace Innovations in Queensland.

The Albert Park incident put another major curveball in LDM’s season, resulting in the hurried purchase and fit-out of an additional ex-Triple Eight car from Tekno Autosports.