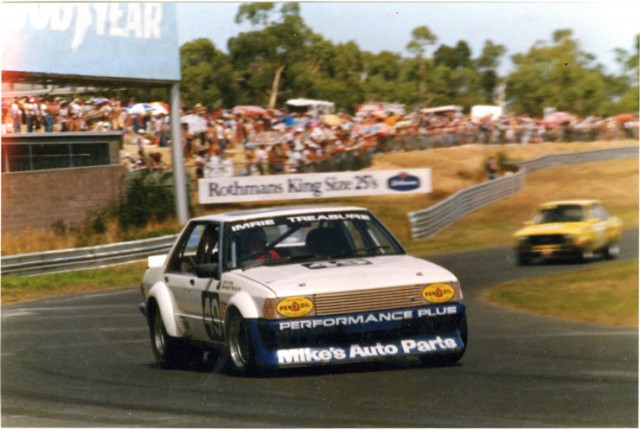 Mike Imrie campaigning the XD at Sandown in 1983

Of the various Group A and C race cars that make up the current Heritage Touring Car scene, Ian Ross’ Ford Falcon XD is perhaps the most obscure.

Plenty of race fans will have seen the #49 white Falcon competing in a variety of HTC events over recent years with Ian and son Fraser behind the wheel, but few will know its brief ATCC history.

Adding to the intrigue is that this car actually has a Formula 1 link too – and not just because it raced at this year’s HTC support event at the Australian Grand Prix at Albert Park.

Originally a crashed taxi, the XD was bought by privateer Mike Imrie in the early 1980s from the wrecking yard of none other than Paul Stoddart; the same lad from Coburg who went on to own and run a Formula 3000 team and later the Minardi Formula 1 team.

We recall Stoddart’s OzJet organisation sponsoring Ford Performance Racing there for a brief time in V8 Supercars a decade ago, but this link is one we hadn’t heard before.

“Stoddart had a wrecking yard and if you take the paint off the car you can see the repairs on it from the crash when it was a taxi,” says current owner Ian Ross.

“There were quite a few XD Falcons running around they were ex-taxis. It was a cheap way to get a body shell.”

Who would have thought a future F1 team owner would have had such a connection to Australian touring car racing.

Imrie bought the 1979-model car in partnership with the late Graeme Treasure in 1983 and raced it in Sandown and Adelaide International Raceway rounds of the Australian Touring Car Championship that year.

They drove together at that year’s Castrol 400 at Sandown only to retire after just three laps.

The car was then entered for the 1983 James Hardie 1000 at Bathurst with Imrie nominated as lead driver and Ken James (who later raced AUSCAR/NASCAR on the Calder Park Thunderdome) entered as co-driver.

But the car never made it to the Mountain.

“Mike had entered for Bathurst ’83 and had all the paperwork and was about to put the car on the trailer but he didn’t go because the sponsor, Bristol Paints, pulled the pin so he couldn’t afford to go,” says Ross.

“But he was entered and accepted. I have all the paperwork, the letter of acceptance. There was an amazing amount of paperwork.” 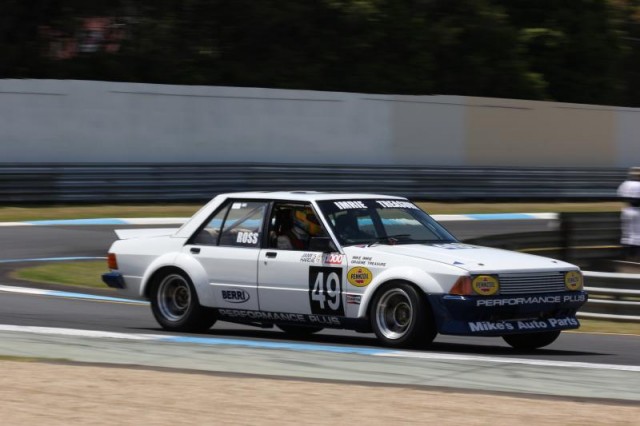 In a nice touch, Ross raced the car at Mount Panorama this year at the Bathurst Motor Festival and, in doing so, completed the car’s journey to race at the Mountain – 32 years later than intended.

Imrie drove the car again at the opening round of the ATCC in 1984 at Sandown – the last time the old circuit was used before the redevelopments and modifications were made to the track to lengthen it for the arrival later that year of the World Endurance Championship.

After the end of Group C in 1984 the XD Falcon passed through the hands of a range of owners before being purchased by Ian Ross in 2010.

It had been sold to Tasmania and even spent some time painted green as a Dick Johnson Greens-Tuf tribute car.

“That was halfway through its life,” says Ross today.

“When Group C cars started to be worth money, one of the previous owners, who had bought it from Imrie originally, went back to find it again and he bought it back as he thought it be worth something.

“In the end it came up on the market and we did a deal on it in 2010. We completely rebuilt the car from scratch. We run the car as it ran at Sandown in February 1984 at the touring car round.”

Ross reckons the next time the Falcon will be on track racing will be at Sandown’s round of the Heritage Touring Cars in November with son Fraser possibly driving, “once we convince him the cones over the top of the hill (at the esses) are bolted down …!”

We look forward to seeing this big V8 Ford back on the track soon. Sometimes the cars with minimal success ‘in period’ are the ones with the best stories.

The 2015 Heritage Touring Cars Championship continues on May 2-3 at Morgan Park in Warwick, Queensland. 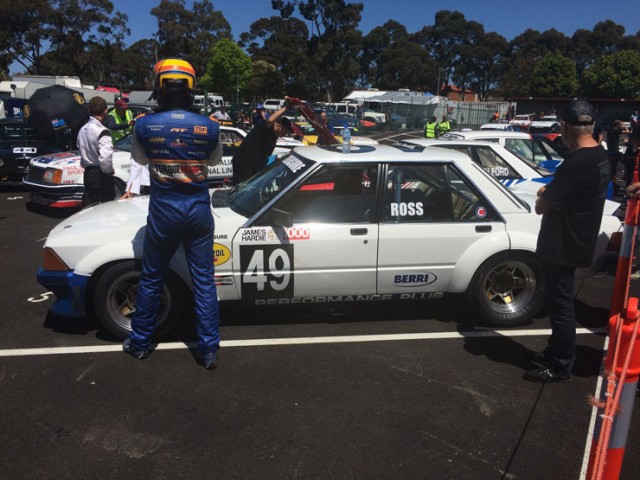