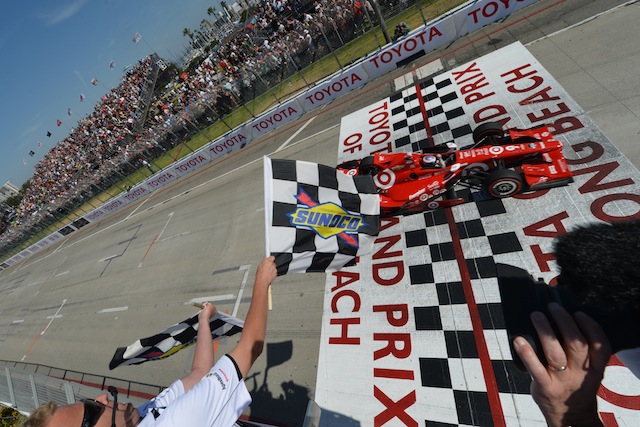 Kiwi superstar Scott Dixon scorched to his first win in the Toyota Grand Prix of Long Beach in round three of the IndyCar Series.

It moves him to fourth on the overall list of most victories after registering his 36th in America’s premier open-wheel class.

Juan Montoya managed to survive after a sustained attack from his Penske team-mate Simon Pagenaud to claim the final podium position.

Pagenaud’s constant sniping at Montoya, who was struggling for rear grip, drew in Ganassi’s Tony Kanaan who loomed strongly in the closing laps but had to settle for fifth.

Dixon, who has recorded three series wins and an Indy 500, was ecstatic at finally claiming what proved to be an elusive triumph in the time-honoured street race.

“It’s such a memorable and such a worthy track. I’m just so stoked.”

Sebastien Bourdais (KV Racing) was also able to close up on the leaders before finishing hard on the heels of Kanaan in sixth.

Andretti was the first of the Honda-powered runners home with Chevrolet blocking out the top seven positions.

After starting 18th Will Power’s race saw any chance of climbing up the order crushed when he stalled on the pit entry when an early caution was called for debris on the track.

Montoya maintains his lead in the series albeit by a slender three-point margin over Castroneves.

IndyCar moves to its third consecutive race weekend at Barber Motorsports Park, Alabama, for round 4 of the series this weekend.