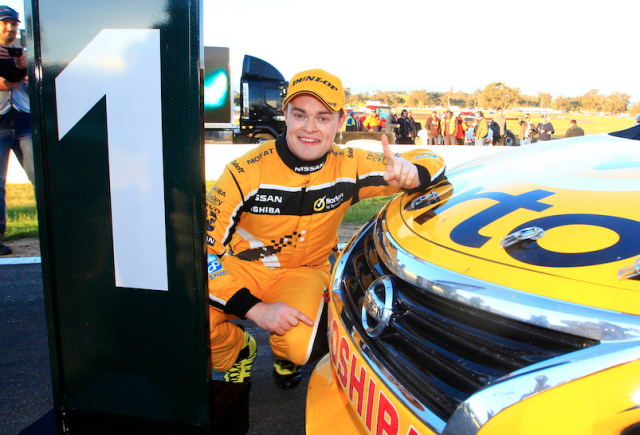 James Moffat celebrating at Winton in 2013

The four-car team has shown plenty of promise since James Moffat’s triumph at Winton in 2013, where the trial of a revised fuel blend in two of its cars awkwardly coincided with a one-two result.

A lack of straightline speed continues to prove a major headache for the Altimas, however, holding back what is thought to be an otherwise strong chassis.

The team planned to address the issue with a two-pronged approach this year, starting with another revision of its aerodynamic package focussed on reducing drag.

Although the aero changes are said to have worked, a modest start to the campaign that is yet to yield a top five finish places further emphasis on a promised mid-year engine upgrade.

The logistics of sourcing and developing a revised cylinder head has been a lengthy and complex process, with the team continuing to work on the changes prior to homologation.

Drivers Rick Kelly, Todd Kelly, James Moffat and Michael Caruso currently sit ninth, 12th, 20th and 23rd in the championship respectively as they attempt to make the most of the current package.

The team heads to Barbagallo next month joining the Ford, Volvo and Mercedes runners in trying to break Holden’s stranglehold of all six championship races held this year to date.

Vote below on this week’s Pirtek Poll asking; Will Nissan Motorsport win a V8 Supercars Championship race this season?