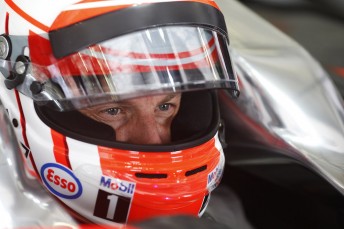 Jenson Button has been ruled out of the Bahrain Grand Prix after his McLaren Honda team were unable to repair a mechanical issue in time for the race.

The 2009 world champion’s weekend at the Sakhir circuit has been plagued by car problems which began with his MP4-30 coming to halt in both Friday practice sessions.

An ERS failure struck early in qualifying on Saturday leaving Button unable to post a time.

The Woking based team had worked through the night to repair the car before confirming shortly before the start of Sunday’s race that a reoccurrence of the issue forced Button out of the race.

“Sadly we are not able to ready Jenson’s car. During fire-up, data indicated an issue originating from his earlier electrical problems,” read a statement on McLaren’s official Twitter account.

Button’s demise is the second time a McLaren Honda has failed to make the start of a race this year after Kevin Magnussen suffered a car failure in the build up to the Australian Grand Prix.