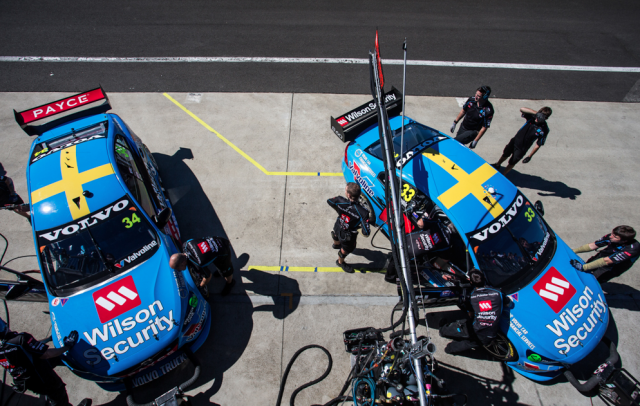 Garry Rogers Motorsport appears destined to become the first team to campaign a non-Ford or Holden in the Dunlop Series next season.

The second-tier class will be open to the Next Generation models from 2016, sharing the grid with the existing Ford Falcon FG and Holden Commodore VE equipment.

Although plans are yet to be locked down, Rogers says he hopes to continue in the series next year and admits that running a Volvo would be an ideal scenario.

“Clearly with the car (Volvo) eligible next year to run in the series, it would be a logical thing to do,” Rogers told Speedcafe.com after the recent shakedown of the team’s third Volvo chassis.

“We’ve talked about it in broad terms but we haven’t made an official decision on it yet.

“I think they (Polestar) will be keen on it but it’ll be about sorting out an engine supply agreement that’d suit both them and us.

“It’d be an additional cost if we were to do it (against running a Holden), but I think if we’re going to be heading down the direction of racing Volvos, it’d be a good thing to do.

“We’ll have to wait and see as the time progresses, but at this stage I’d say there’s clearly a chance we would.” The Holden currently campaigned by GRM in the Dunlop Series is owned by Dragon Motor Racing’s Tony Klein.

Klein also owns GRM’s two Holden-bodied Car of the Future V8 Supercars and is yet to firm his plans beyond this season.

The recent completion of GRM’s third Volvo has meanwhile raised the question of the team running a wildcard in the V8 Supercars Championship later this year.

Like many squads with spare chassis, Rogers says he’ll welcome a one-off additional entry, as long as the considerable extra cost can be justified.

“Everything is on the radar, it’s a matter of zooming the radar onto the dollar notes,” he mused.

“Clearly if we could put the funds together there’s no reason we couldn’t run a wildcard Volvo.

“We’re in the business of racing cars to earn a living so if someone can fund it it’s something we’d talk about.”

Dragon had enlisted GRM to help run its two Holdens in last year’s Supercheap Auto Bathurst 1000, before Klein pulled the pin on funding the exercise.