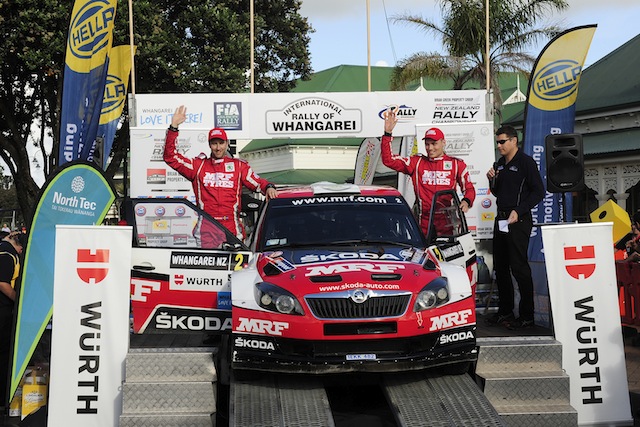 Swede pairing Pontus Tidemand and co-driver Emil Axelsson have made a successful debut in the FIA Asia Pacific Rally Championship by winning the International Rally of Whangarei.

The difference was a mere 1.9s.

The first round for the 2015 season, International Rally of Whangarei started with 48 competitors.

The journey covered 282.2km of fast flowing rural roads in the Northland and Whangarei regions, broken into 16 timed tests.

Starting Friday night with a ceremonial welcome and two night-time Super Special Stage runs, Tidemand opened an early lead that grew as the weekend wore on.

The Swede won all but one of the special stages.

“It is fantastic. Right from my co-driver, the car, the tyres – have all done a fantastic job,” Tidemand said.

“Everything has worked perfectly for us so am really happy with the result.
“It was important to get experience with these roads, their surface and pace notes – so the result makes for a perfect weekend,” said Tidemand just prior to the ceremonial finish.

While not eligible for points in the New Zealand series his consistent pace put him well ahead of competitors he previously lined up against.

Of the 31 cars that left Whangarei this morning, 21 crossed the finishing ramp.

The second round of the Asia Pacific Rally Championship is scheduled for New Caledonia from May 15-17.