Alister McRae triumphs in Race to the Sky

Alister McRae triumphs in Race to the Sky 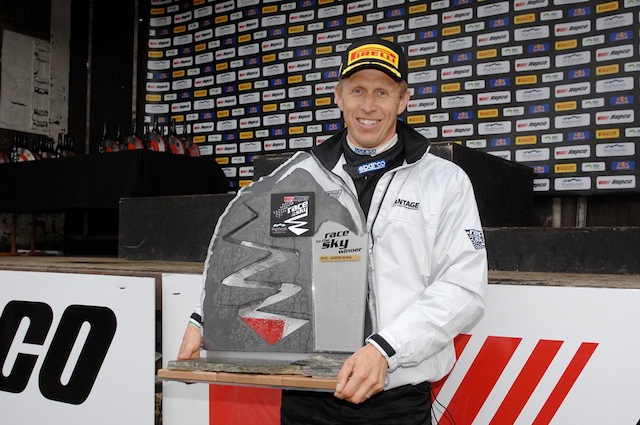 Alister McRae takes a popular victory in the Repco Race to the Sky event in New Zealand. pic: Euan Cameron

Alister McRae secured a popular win in the resurrected Repco Race to the Sky hillclimb in New Zealand’s Cardrona Valley.

Driving the Subaru WRC which was driven to victory at the same event in 2001 by the late Possum Bourne, McRae overcame a major engine issue in the first run to become the new king of the mountain.

Australian Brett Hayward was fastest in the morning’s run up the 14.5 km gravel hillclimb course, before guiding his self built supercharged Suzuki-powered open wheeler into a well-deserved second place.

With McRae recovering from an engine change, the eight-time winner Nobuhiro ‘Monster’ Tajima suffered an incident which sent him flying several hundred metres off the road and leaving his Super 86 hillclimb machine damaged and unable to continue.

Tajima, who escaped unscathed from the high speed incident when his rear wing peeled off the car, said ‘my car is broken. my heart is broken.’

McRae was jubilant a success in his first attempt at the event which was previously last run in 2007.

“Yesterday was like a learning experience, but then to stop on today’s qualifying, well, I’ll not telling you what I said to myself because there’s kids here but obviously I was very, very disappointed,” McRae said.

“But then you think, well, hold on, we’ve got a spare engine.

“The time to change that was very tight, but the Possum Bourne Motorsport boys did a tremendous job.

“I know what Possum means to the motorsport community here so to do that in his car, for Craig to invite me down here, it’s been a great weekend!”

Ffitch was presented with the fastest Kiwi trophy by Possum and Peggy Bourne’s youngest son, Spencer.

Event promoter Tony Quinn, owner of Highlands Motorsport Park nearby in Cromwell, told fans gathered at the podium presentation that the event will definitely run again next year.

The Open 4WD win went to Christchurch’s Michael Tall in a Mitsubishi Evo.

The rallycourse class win went to Geraldine’s Kieran Hall in a Subaru STi while Daniel Callinan took the historic rally win in a Ford Escort.