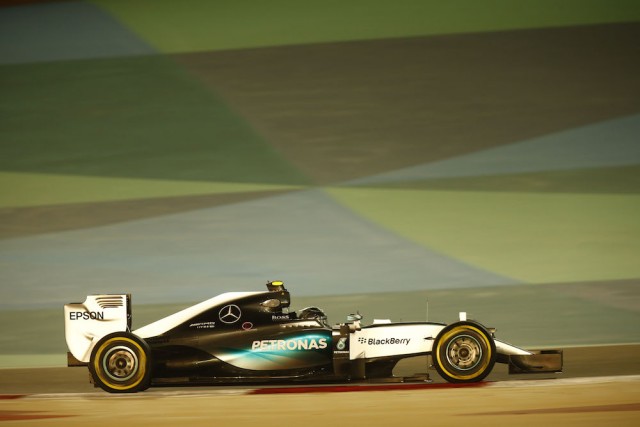 Nico Rosberg once again confirmed Mercedes’ pace as he topped the times in Friday practice ahead of this weekend’s Bahrain Grand Prix.

The German driver emerged as the man to beat with his 1:34.647s eclipsing Lewis Hamilton’s previous session best by 0.115s.

Both Rosberg and Hamilton used the day’s earlier 90 minute hit out to work on heavy fuel runs before showcasing their true pace in the final evening practice.

Ferrari remained best of the rest as Kimi Raikkonen edged his opposite number Sebastian Vettel to third spot, with the Maranello outfit half a second adrift of Rosberg’s leading Mercedes.

Although on top at the end of Friday, Rosberg says Ferrari’s improved speed means Mercedes cannot afford to relax this weekend .

“The afternoon session wasn’t very useful as the conditions are so hot and really quite different to what we see in the evening – which is of course when qualifying and the race will be held,” said Rosberg.

“That makes the second session very valuable and we learned a lot – for example that Ferrari are very good on the long runs.

“On qualifying laps we look quicker but on race pace they are really strong so we will have to do a lot of work tonight to find the perfect setup.”

However, there is a cloud hanging over Hamilton and Raikkonen, who were both called to the stewards following practice for failing to leave the pit lane correctly.

The latter was issued with a reprimand after officials declared the Finn’s re-entry to the track was unsafe.

Raikkonen’s team-mate Vettel was a target for the stewards with the four-time world champion and Sergio Perez investigated for a collision which brought the red flags out in the dying moments of Practice 2.

An FIA panel deemed the incident not worthy of any penalty.

“We’re more or less where we expect to be,” said Ricciardo.

“We’re a little bit more competitive in cooler conditions so the night session should be good.

“The tyre degradation is quite high here, it will probably be a two stop race, but we’ll see.”

Ricciardo was narrowly quicker than Pastor Maldonado in seventh with the Sauber of Felipe Nasr in eighth.

Meanwhile, team-mate Jenson Button encountered a difficult day having been instructed to stop the car on circuit after just three laps.

The 2009 world champion returned to the track where he set a time good enough for 19th position.