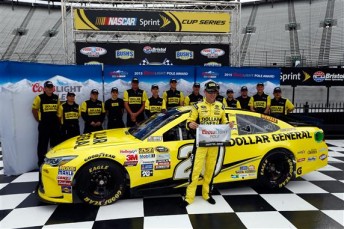 Matt Kenseth has won the pole for the Food City 500 in Support of Steve Byrnes and Stand Up to Cancer at the world’s fastest half-mile track – Bristol Motor Speedway.

Further good news for Kenseth is that he has three career Sprint Cup wins at Bristol in 30 previous starts.

Sharing the front row will be Brad Keselowski, while Carl Edwards and championship leader Kevin Harvick will start one row back.

While last week’s race winner in Texas Jimmie Johnson will start from 28th.

The major incident during the qualifying runs went the way of Greg Biffle who lost control off of Turn 3 just over three minutes into the opening round of qualifying. His car went sideways and somehow suffered little damage and he will start from 33rd.

Brendan Gaughan and Ron Hornaday Jr. did not qualify for the 43-car field.