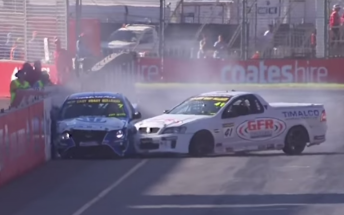 The Fane/Oaklands crash in Adelaide

V8 Ute racer Geoff Fane has been suspended from all CAMS events until the end of the calendar year following an appeal hearing in Melbourne.

CAMS had appealed the penalties levied on Fane by stewards in the direct aftermath of the March 1 incident, seeking a harsher punishment.

The initial verdict had seen Fane excluded from the meeting and handed a $10,000 fine, half of which was suspended until the end of the year.

The incident saw Fane make contact with the Ute of rival Bruce Oaklands at the exit of the final corner.

Fane’s Ute subsequently pushed Oaklands into the pitwall on the inside of the circuit.

“The CAMS Appeal Tribunal found that Mr Fane had acted deliberately and in a dangerous manner, actions considered intolerable in motor sport,” read a CAMS statement.

“Despite having a good driving record in motor sport competition, CAMS suspended Mr Fane until 31 December 2015.

“Mr Fane will not be entitled to compete in any CAMS event until after that date.”

Oaklands, who is set to return his repaired Ford to the track for a test at Sydney Motorsport Park today, said he will be seeking damages from Fane following the ruling.

“I am glad CAMS has taken this incident seriously and I thank them for enforcing the rules we all follow as drivers,” said Oaklands.

“Based on the findings of CAMS, our Solicitor David Deutsch the Principal of Deutsch Partners Law Firm will commence Legal Proceedings against Fane, seeking the recovery of costs incurred by his reckless actions.”