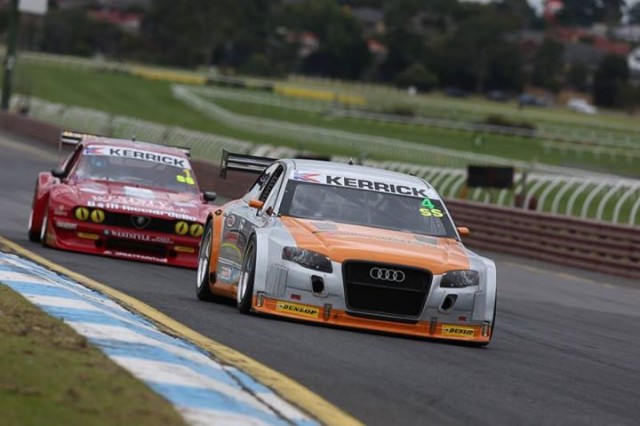 Perkins will replace Hossack in the Gourlay Audi

Hossack suffered one broken and one fractured knee when he crashed a wingless sprintcar at Simpson Speedway last Saturday.

Perkins has been called in to race the car for the May 15-17 Winton meeting, which marks the Sports Sedan category’s first appearance at a V8 Supercars event in over a decade.

The 28-year-old will drive both the Audi and the #22 Holden Racing Team V8 Supercar on the Friday of the meeting as he prepares for his Pirtek Enduro Cup seat alongside James Courtney.

“I have always watched Sports Sedan racing as a kid and I have been keeping an eye on the more recent battles between Darren and Tony (Ricciardello),” said Perkins.

“You never like replacing someone due to injury but I think it should be a great opportunity to drive John’s car.

“I was very impressed when I saw the car in the workshop, it looks like a fantastic piece of engineering.

“While I hope Darren can recover as quickly as possible, I am definitely looking forward to doing the best I can for John and the team.”

Hossack, who faces a lengthy recovery process after undergoing surgery on his knees this week, said he’s keen to see the Audi continue racing in his absence.

“I said to John to make sure he put someone in the car; there is no reason for him not to be pursuing his racing just because I am not available,” he said.

“It will be good to have someone of Jack’s calibre bringing his knowledge to the table also.”

Hossack also thanked Simpson Speedway and those who had sent him messages of support this week.

“It has meant a lot to receive so many messages and reading them has certainly helped pass the time in the hospital that is for sure,” he said.