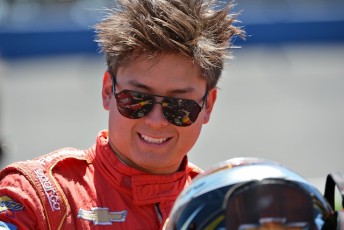 Chip Ganassi Racing has confirmed that Sebastian Saavedra and Sage Karam will alternate the duties on the team’s fourth car for the balance of the IndyCar season.

Saavedra will slot into the #8 AFS Chevrolet at the third round of the series on the streets of Long Beach, California, this weekend.

The 2013 Indy Lights champion Karam had started at the opening two races at St Petersburg and New Orleans and will return to the seat for the Barber Motorsports Park round in Alabama next week.

“It’s good to be back in the Verizon IndyCar Series,” Saavedra said. 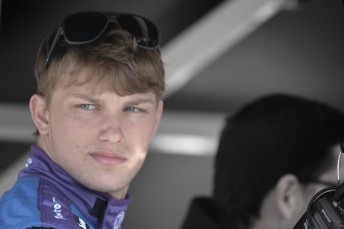 “This is an amazing opportunity for me with AFS to work with one of the most prestigious teams in all of racing.

“I’m very grateful to Chip and the team, which have had an incredible history in the sport, and specifically in the Indianapolis 500.

“I’m looking forward to Long Beach and doing everything I can to help get the No. 8 car to the front.”

Meanwhile veteran Oriol Servia will start for the Rahal Letterman Lanigan team at the season’s showpiece Indianapolis 500 on May 24.

Servia has previously run for the squad in the 2009 and 2014 Indy 500s and also four other races last season.

“I honestly couldn’t be any happier to announce that I will be entering the 99th Indianapolis 500 with Rahal Letterman Lanigan Racing,” Servia said, who was classified 11th at the Brickyard last year.

“There is a saying in Spanish, ‘A la tercera va la vencida’ (third time lucky), that I feel fits our effort very well.

“This will be our third attempt together to cross the most famous brickyard first after 500 miles.”