Rosenberg with Percat and Slade last season. pic via adelaidenow

South Australian businessman James Rosenberg says he’s not ready to walk away from V8 Supercars, despite having handed back his Racing Entitlements Contract at the end of 2014.

The long-time supporter of young driving talent elected against entering the new season after a lack of sponsorship for Walkinshaw Racing’s Nick Percat-driven fourth car left an imposing budget shortfall.

The move ended a five-year run of REC ownership which had earlier seen Rosenberg facilitate entries for Tim Slade at Stone Brothers Racing and Erebus Motorsport.

Rosenberg, whose roots in the category stretch back to the mid-1990s, has retained a minor involvement this year by continuing to back Percat, who switched from Walkinshaw to Lucas Dumbrell Motorsport after the off-season shuffle. 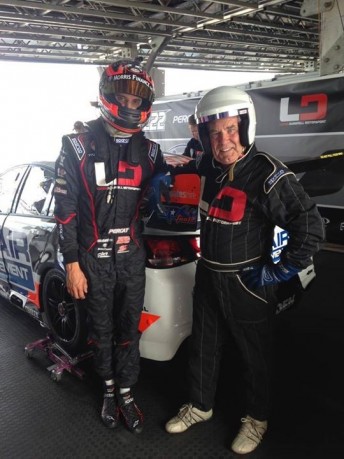 Rosenberg went for a hotlap with Percat at the recent AGP meeting. pic via facebook

Attending the first three events of the year with Percat, Rosenberg will miss the next two race meetings while overseas, but says he’ll be present at the remaining 10.

“I was pretty jaded at the end of last year,” Rosenberg told Speedcafe.com.

“The relationship with Walkinshaw didn’t end as either party would have liked, but I still have a passion for motorsport and continue to support Nick.

“I rate him very highly and think he’s got a big future in the championship.”

V8 Supercars kicked off the tender process for Rosenberg’s returned REC last Friday, calling for expressions of interest to be lodged by April 24.

The category said it had already received inquiries about the license prior to the tender opening, leaving optimism that the field will return to 26 cars in 2015.

Triple Eight is thought to be the most likely to pick up the REC for its recently announced third car, while other parties are yet to show their hand.

The REC agreement stipulates that all licenses handed back must go through a tender process, with the asset’s previous owner receiving the funds from any sale.

Although recent changes to the agreement ensure that Rosenberg is unable to directly bid for his own license back, he isn’t ruling out helping a consortium place its own bid.

“I would look at all options available to me,” he said.

RECs handed in by Tony D’Alberto Racing and Triple F Racing at the end of 2013 received no bids during their mid-2014 tender and are now under V8 Supercars control.

Although they could eventually be reissued, neither are understood to be eligible to receive REC dividends next year, leaving them unlikely targets for purchase.

REC holders received no direct monies from the championship during recent seasons thanks largely to an unfavourable final television deal with the Seven Network.

Payments of approximately $350,000 per entry are however expected this year and next following the category’s landmark $241 million, six-year media rights agreement with Fox Sports and Network Ten.

Despite being squeezed out of REC ownership by the difficulties of matching sponsorship revenues to operating costs, Rosenberg is optimistic about the category’s future.

“The sport is struggling like a lot of industries are in the current environment,” he said.

“But the product is still very, very good so I do see a future for it for sure.

“I think everything goes in cycles and eventually it will turn.

“I’d like to be (directly) involved again, but how, where and when is yet to be seen.”