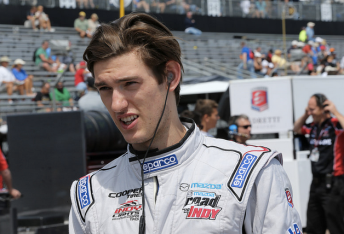 Matthew Brabham has secured a last ditch deal to race for Andretti Autosport in the Indy Lights round at Long Beach this weekend.

After running at the season opening race at St Petersburg where Brabham turned the fastest lap last month, the 21-year-old is further hoping to close out a deal that could see him back in the series full-time.

With no full-time ride in place for 2015 Brabham has been hamstrung with a race-by-race future.

He will drive the #83 Stellrecht Company Andretti Autosport Mazda at the famous Californian street event where he claimed a third last year during his maiden full-time year in Indy Lights.

“I am incredibly happy and grateful to be heading to Long Beach,” Brabham said.

“A big thanks must go to Bob Stellrecht for believing in me and giving me this opportunity.

“I am confident we will be right up there at the top and fighting competitively.

“The team has been doing a great job and we were constantly learning and improving the car at St. Pete.

“It is an awesome race car and I couldn’t imagine anything better than muscling it around the wall jungle of Long Beach.”

“We’d love to have the sponsorship to run him the remainder of the season, and are working hard on it. Hopefully something will come through for him.”