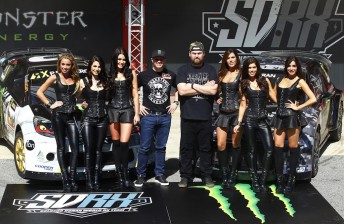 Reigning champion Petter Solberg has confirmed Britain’s Liam Doran as his team-mate in the new SDRX squad ahead of the FIA World Rallycross Championship.

“We’ve been working on the car for some time and I’m feeling very well prepared for the start of the season,” Solberg said.

“We’ve got some pre-season testing in France with the DS3 next week ahead of the first race in Portugal at the end of the month.

“I’m also very excited to be joining forces with a talented RX driver like Liam Doran.

“He has worked hard over the winter to refocus, and has come back stronger from a very tough season in 2014.

“This really shows his motivation to want to fight back. I think the dynamic will work well between us this year.”

In other news from the series media launch in Barcelona, Alx Danielsson said he will compete alongside Rene Muennich in the opening three rounds.

Reinis Nitiss and Andreas Bakkerud will defend their team’s title in a pair of Fiesta ST Supercars for Ford Olsbergs MSE.

The team will also run a wildcard campaign for a third car for Russian Timur Timerzyanov with the entry to be fielded by Namus OMSE.

The World Rallycross Championship kicks off at Montalegre, Portugal from April 24-26.