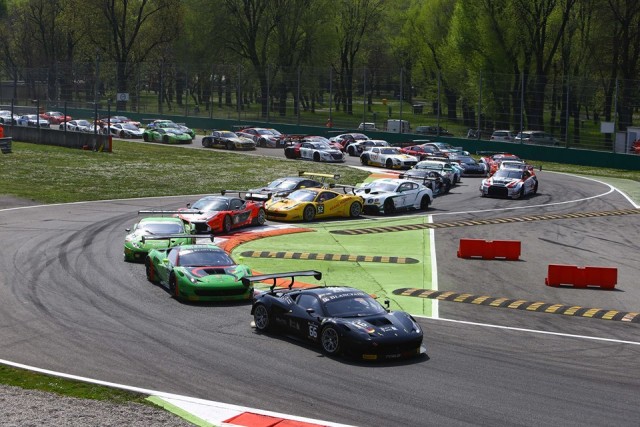 The 58-strong BES field heads through the first chicane

Controversy hit the opening round of the Blancpain Enduranace Series at Monza as Lamborghini was stripped of a debut win for its Huracan.

The #19 Grasser Racing Team entry of Fabio Babini, Andrew Palmer and Jeroen Mul had taken a dominant 37 second win in the three-hour contest.

A discrepancy with the car’s refuelling restrictor subsequently saw the car disqualified, handing the win to Norbert Siedler and Rinat Salikhov’s Rinaldi Ferrari, which also took the Pro-Am Cup.

The lead WRT Audi of Laurens Vanthoor, Jean-Karl Vernay and Robin Frijns was elevated to second ahead of the Duncan Cameron/Matt Griffin AF Corse Ferrari.

Grasser has signalled intent to appeal the ruling, which came on the debut of Lamborghini’s first in-house GT3 contender.

The trio finished a lap down in 15th on a weekend that saw all three of the 650S McLarens struggle for speed. 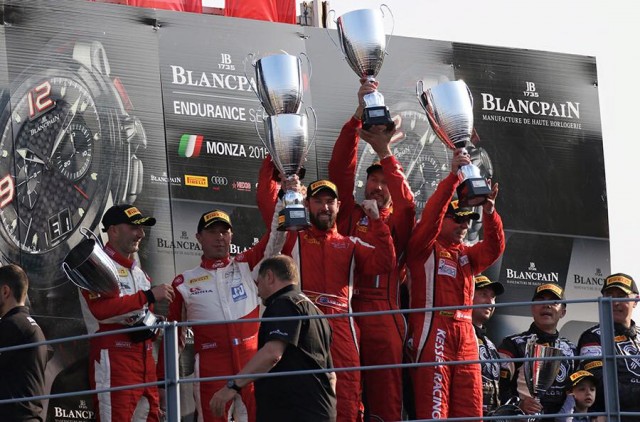 Talbot, centre, celebrating a class victory on the podium

“Surreal is the only way to describe this victory,” beamed Talbot post-race.

“To be at the legendary Monza Autodrome racing in a Ferrari and coming away with the class win is truly unbelievable.

“Being my first time at this track and with only two years of racing experience, this result hopefully sets the tone for our 2015 season.”

The final hour had included a major crash for Ronnie Volani, who lost control of his McLaren and clouted the barriers at the Parabolica after misjudging a passing move on Mike Parisy’s Bentley.

Craig Baird leads the Carrera Cup Asia points standings after taking a win and a fourth from the opening event of the season at the Chinese Grand Prix.

Driving for Hong Kong-based Clearwater Racing, Baird wrestled the lead from Rodolfo Avila on the opening lap before holding on for victory.

“To come out of the blocks and win the first round is very, very satisfying, especially with Mok (team owner Mok Weng Sun) giving me this opportunity,” said Baird, who is competing full-time in the class for the first time since 2010

The second heat was taken out by local driver Ho-Pin Tung ahead of Rodolfo Avila, Ragginer and Baird, while Van der Drift was left stranded on the grid due to a broken clutch.

Just two points cover Baird, Avila, Tung and Ragginger at the top of the standings ahead of the second round at the Korea International Circuit on May 15-17. 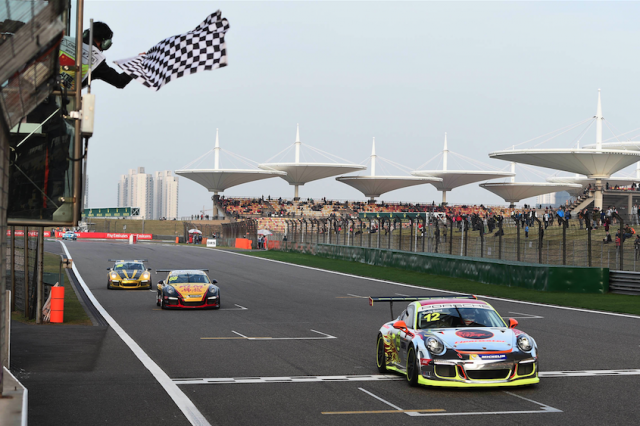 Australian Scott Andrews kicked off his campaign with the Canadian-based Exclusive Autosport at Road Atlanta with a victory.

Andrews, part of the squad which fields three Australian-built Spectrum 014 chassis, claimed a win in the second of three races, hoisting the first triumph for the team.

He charged from 10th on the grid while his team-mate Jack Mitchell jr won the final heat at the 12-turn track.

“To come here on the opening weekend in F1600 Formula F and take two wins from three races, I’d describe myself as pleased but not satisfied,” Exclusive Autosport team owner Michael Duncalfe.

Andrews (third in the opening race) claimed third position behind his team-mate in the final race, claiming his third straight podium for the weekend and has assumed championship lead.

“Well we rolled out fast, which I expected, and it turned out to be a great weekend,” Andrews said.

“The team’s hard work really paid off and I got up to speed quickly learning how to really use the draft in the races.

“I’m stoked to get my first international F1600 victory, it means a lot to me and especially to achieve it with this team.

“As a proud Australian it’s also great to win in an Australian built car.” 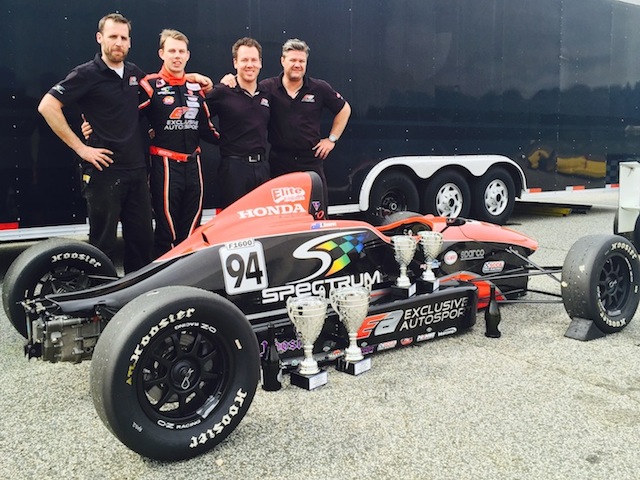