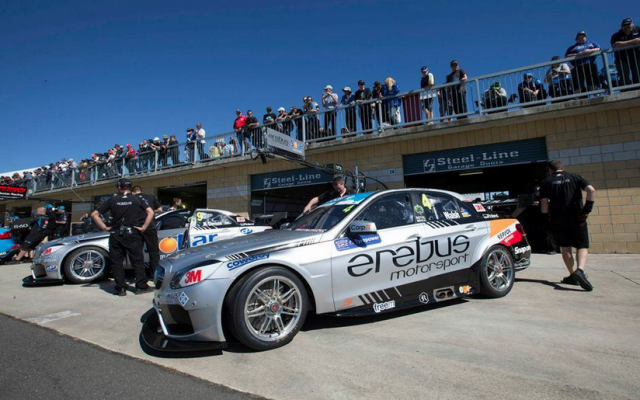 The Erebus E63 AMGs in the Symmons Plains pitlane

Erebus Motorsport’s improved form last time out at Symmons Plains came a year on from the team’s one and only V8 Supercars race win.

Erebus, borne out of the legendary Stone Brothers Racing operation, entered the championship in 2013 with much fanfare.

Despite boasting one of the category’s biggest budgets, it has largely struggled to be competitive with its customer Mercedes-AMG equipment.

Last year, occasional flashes of speed – which included a sprint race win at Winton on April 5 – led to little more than 14th and 20th in the championship for Will Davison and Lee Holdsworth.

Holdsworth subsequently left the squad at the end of 2014; the latest in a series of exits that had also included former team manager David Stuart and SBR co-founder Ross Stone.

This year has also marked the end of Erebus’ formal association with AMG which, after initially developing the technical package, had continued into the second season under little more than a licensing agreement.

Following a tough start to 2015, continued in-house work from Erebus on the Mercedes engine contributed to a vastly improved showing at Symmons Plains late last month.

Will Davison, who had first run the upgrades at Albert Park, qualified on the second row for two of the three races and later declared it the team’s most encouraging weekend to date.

“We’ve given ourselves a little bit of free lap time and improved the driveability which in turn helps the chassis,” Davison told Speedcafe.com of the progress.

“For sure we’ve taken some steps there but there are a lot more steps to come.

“I think we’ve given everyone a small taste that we’re not sitting on our hands and doing nothing.”

Team-mate Ashley Walsh is also hopeful of receiving upgrades by Barbagallo and will enjoy a rookie test at Queensland Raceway next week.

Davison and Walsh currently sit 21st and 25th in the championship standings respectively heading to the May 1-3 Barbagallo meeting.

This week’s Pirtek Poll asks; Will Erebus win a V8 Supercars race in 2015?