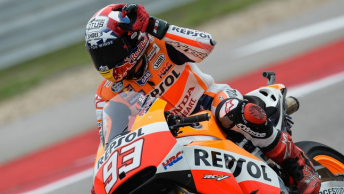 Marc Marquez has returned to his brilliant best by marching to a dominant victory in round 2 of the MotoGP Championship at Austin, Texas.

Marquez had a fight early in the race before sweeping into the lead with 17 laps remaining and breaking clear of the field at the Circuit of the Americas.

The victory sees Marquez move to within five points of the championship lead.

Ducati’s Andrea Dovizioso had led early then battled with Marquez before surrendering the lead to the factory Honda champion.

Valentino Rossi, the opening round winner in Qatar, was third in the Yamaha after dicing with Dovizioso.

Jorge Lorenzo took fourth ahead of Andrea Iannone who had a splendid ride for Ducati for fifth.

Bradley Smith, who had started from 10th, had a great run moving up to fourth before finishing sixth.

Jack Miller had a solid run on his open class LCR Honda to claim 14th.

With 14 laps remaining Rossi then claimed Dovizioso for second as Marquez slipped to a 1.9s lead.

Rossi still clutches the lead in the championship by one point over Dovizioso as the MotoGP heads to Argentina for the next round from April 17-19.