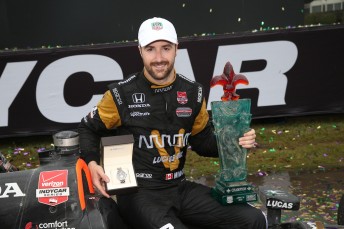 Run in sodden conditions, Hinchcliffe benefitted from a string of caution periods to coast over the line under yellow, running out of fuel after the chequered flag.

It was a red letter day for Simona de Silvestro (Andretti Autosport) who scored her best career finish in fourth ahead of opening round winner Juan Montoya.

Chip Ganassi driver Tony Kanaan was sixth ahead of Will Power.

The fourth Team Penske runner Simon Pagenaud was involved in a nasty incident late in the race which ensured the event went to a timed finish. 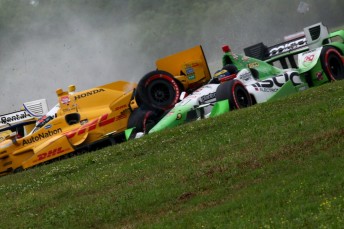 Bourdais had a lucky escape from serious injury as Hunter-Reay’s car momentarily lifted off the ground striking the tub just behind the Frenchman’s head.

Hunter-Reay said: “Pagenaud is on my right I’m using my regular racing line and there’s no more room. I don’t know what he was doing out there.

But Pagenaud was a little more stern with his take on the incident.

“It was side-by-side. But it seems like its his (Hunter-Reay’s) track and he runs me off,” Pagenaud said.

“It’s really bad for Sebastian and to me it’s not a good move.”

The IndyCar Series moves to Long Beach for the next round from April 17-19.