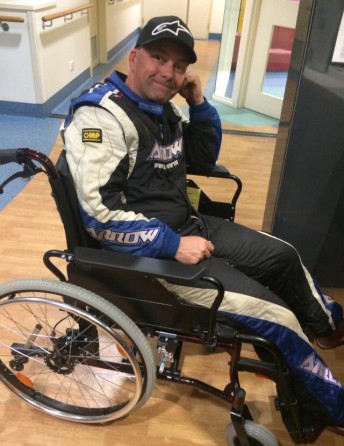 Darren Hossack in a wheelchair following the accident. pic via DPE Kart Technology

Sports Sedan front-runner Darren Hossack is set for a spell on the sidelines after sustaining injuries in a speedway crash at the weekend.

The 45-year-old injured both knees in an accident while driving a wingless sprintcar at Victoria’s Simpson Speedway.

“Darren had a nasty crash in the second heat and as a result has ended up in hospital,” Darren Hossack Motorsport confirmed on its Facebook page.

“Scans show one fractured knee and one broken knee.

“Thanks to the Simpson Speedway staff and all our friends, crew and amazing sponsors for all your support and messages.” 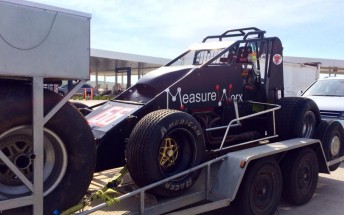 His campaign got off to a troubled start at Sandown late last month, where a fire and a puncture stopped the Victorian’s progress while leading in Races 1 and 3.

Hossack has been a Sports Sedan stalwart in recent years, combining the category with stints in speedway and Superkarts.