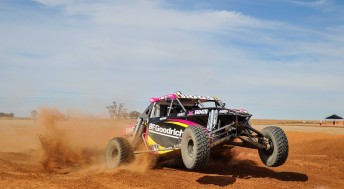 Reigning champions Shannon and Ian Rentsch have continued their winning streak, taking victory at the opening round of the Australian Off Road Championship at the BFGoodrich Tires Sunraysia 600 at Mildura over the weekend.

Rentsch started the weekend in top form, placing the #Aus1 SR Racing Jimco on the ARMOR ALL Pole Position during the top ten shoot out, before locking horns with rising offroad star Tanner James, who snatched the overnight lead from Rentsch by 19s.

The battle was set to escalate on Sunday morning until the Mildura local, Tanner James, retired with a broken axle 6km from the start, handing the lead to BFGoodrich Tires backed Rentsch.

With a dust free run ahead, the Victorians left the rest of the field in his dusty wake, winning the 600km endurance race in a time of 6:18.55.351s.

Matt Hanson and Leigh Wells returned to the podium at the BFGoodrich Tires Sunraysia 600, finishing second outright in the #7 SMU Jimco, 14min 11sec behind Rentsch.

“We went out today with the plan of 4 more steady laps and we looked after the car, Leigh Wells said.

“After a tough year in 2014 both on and off the track all we wanted was a finish so to get second outright was a good start to season, a good bank of points and we can now head to Finke with confidence that the car is good.

“The track was great, every paddock was different terrain and reminded us of many other tracks like Baroota, Hyden, SeaLake and Goondiwindi. It has a bit of everything and we really enjoyed it.”

Even with Tanner James retirement, the local fans still had plenty to cheer for with Tanner’s father, Aaron James and navigator Peter Luckraft piloting their V8 powered #93 Alumicraft ProBuggy home in to third outright.

Luke Erceg and Daniel Ziembinski took the Prolite class honours and fourth outright in their Aussie built #150 Matrix, after a see-sawing fight with the #32 Racer Probuggy of North Queenslands Michael Marson and Chris Colborne and the #133 Prolite of Dale Martin and Adrian Rowe. #105 Les Marshall and Glennys Rose kept to their pre-race game plan to take third in Prolite and 8th outright. Russell and Judy Hartnett were the best of the Super 1650’s, finishing 4 laps in their #203 Razorback.

The hard work over the offseason rebuilding their V8 Hilux paid handsome dividends for Paul Youman and Graham Kluck, with a comfortable Performance 2WD class win in the #501 Hillbilly Racing Hilux. Consistent lap times across all six laps of the 100km course saw the team achieve a personal best of 7th outright at an AORC round.

By contrast the competitors in the Extreme 2WD category had a tough weekend at the office, with persistence paying off for Steven Sanderson and the JAWS Racing Team who took 9th outright and first in class with their #403 Jimco Trophy Truck after their navigator Braeden O’Cass became ill on Saturday.

A tree stump almost ended Greg Gartner and Jamie Jennings innings, however a quick repair to the front suspension in the pits allowed them to navigate the #410 Ford F150 TT home second in class.

The Production 4WD Class produced one of the classic battles of the weekend, with Pickering, Galea and Perrett all going toe to toe.

After 8 hours 11 min of racing it was Western Australia’s Jason Galea and Marcus Christie who took the win in their #706 Toyota FJ Cruiser, beating the Mitsubishi Pajero of veteran campaigner, Geoff Pickering and Dylan Watson in second and AORC newcomers, Amy Perrett and Lincoln Staude who were third in class.

The Australian Off Road Championship now heads to the red centre for the second round of the season, the 40th anniversary Tatts Finke Desert Race on June 5-8.