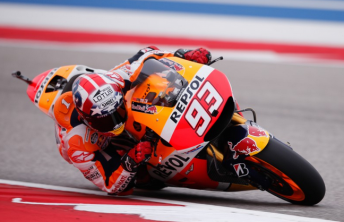 Spanish ace Marc Marquez resorted to his spare bike to secure pole position in a stunning close to qualifying for the Austin, Texas, MotoGP.

Marquez came to a stop beside the pit wall with three minutes remaining in Q2, which saw him forced to sprint to his pit and climb aboard his second factory Honda.

During the ensuing crucial seconds Marquez dropped from the top of the time sheets to seventh but in the dying stages he produced a crippling lap to vault back to the top.

Marquez unleashed a supreme effort, surviving a scare to post a 2:02.135s lap to land the prime spot by .3s.

“With the second bike the set-up was not perfect and I had a big moment,” Marquez said.

Andrea Dovizioso was second for Ducati while Jorge Lorenzo was third on the Yamaha.

The order saw Lorenzo dislodge Crutchlow before Dovizioso went quickest but ultimately they were all sitting ducks for Marquez’s stunning late effort.

Dovizioso remained diplomatic afterwards but realises he faces a battle to match the pace of the #93 factory Honda of Marquez at the Circuit of the Americas.

“The lap time is pretty good and I’m happy. We have to work in a little more to match that speed (of Marquez),” Dovizioso said.

Aussie Jack Miller will start from 19th on the second LCR Honda.