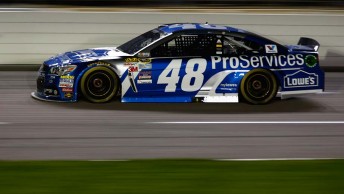 Jimmie Johnson scored his second win of the season

Jimmie Johnson has scored his second win of the NASCAR Sprint Cup season taking the chequered flag at the Duck Commander 500 at Texas Motor Speedway.

In a race that was dominated by Johnson and defending series champion Kevin Harvick, it was a move after the final re-start which scored the six-time champion the victory.

Johnson and Harvick took four fresh tyres at the final caution period, while Jamie McMurray took two and was out front. As Harvick tried to pass McMurray on the outside for the lead, Johnson went low and out in clean air was never headed.

The result was Johnson’s second-straight win in the Lone Star State and fifth overall, extending his record as the track’s all-time winner.

“We’ve had an awesome start to the year (2 wins) and having last week off was good for us. We could sit down relax, re-boot and come back to the track and it brought me a fast racecar that was good all weekend.”

Harvick tried to run Johnson down, but he scraped the wall exiting Turn 2 with three laps to run and Dale Earnhardt Jr. got into second place. Harvick then got a great run off the final corner of the race to take second by half a car-length.

Harvick has finished in the top-2 in six of the seven races contested this year and he extended his points lead with his result in Texas.

Joey Logano finished fourth after battling with Harvick earlier, while his Penske team-mate Brad Keselowski came back from a pit road violation to finish fifth.