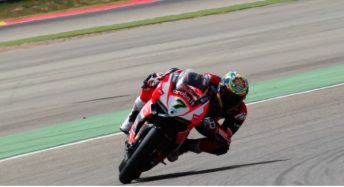 Chaz Davies on his way to milestone Ducati victory

The Welshman dominated the second race of the meeting as he took the chequered flag by 3.1s from championship leader Jonathan Rea, who had been battling a fever all weekend.

Davies’ triumph proved to be a milestone moment for the Italian manufacturer with the victory the first for the Panigale in the series.

While the Ducati cleared out in front, the scrap for the podium places provided much of the action with Rea just holding off the Aprilia of Leon Haslam at the chequered flag.

It proved to be a disastrous race for former world champion Tom Sykes with the Kawasaki rider suffering a a nasty high side which vaulted him out of fourth.

Meanwhile, reigning world champion Sylvain Guintoli failed to make inroads in the championship with a fall towards the end of the race.

Rea emerged as the star of the opining race with the Ulsterman pipping Davies for his fourth win of the season.

The Kawasaki rider had lost the lead on the final lap but held his nerve to pass Davies at the final corner to take the chequered flag by 0.051s, with Sykes securing the final place on the podium.

A victory and a second place for Rea has seen the Northern Irish rider extend his championship lead to 26 points over Haslam.

The World Superbike Championship continues with a visit to the famous Assen TT circuit on April 18-19.